The Tacoma Country and Golf Club has updated the Master Plan and on the 9th day of this month in a historic meeting which included both the Green Committee and the Board of Directors, it was approved and partially funded.  If you right click on the image above and select save image as..........you can save a copy of the plan to your computer which you can zoom in on and study in detail.  There are several projects within the plan created by renowned architect John Harbottle III, but to sum it up in one word you could say the new course will simply be "classical".  And really I hesitate to use the word "new" to describe the course once the plan is completed.  I hesitate because once the plan is completed, I believe the golf course will be more likened to how the Club's founders dreamed it to be.  So it won't be a "new" course, it will be be a very old course "reborn".  Knowing this great Club was founded by some Scotsman almost 120 years ago, I imagine the vision was for a course that was more open and favored the ground game similar to the game played upon the greatest golf courses in the world which today reside in Scotland.  The first two generations of members at this Club were able to maintain the links style and traditional heritage for which it was based upon. We have very old photographs to prove that.  But in the 50's and thereafter, the Club went in the same direction as many throughout the country.  Trees were planted with the thought that this would beautify the property.  Well everyone has their own idea of beauty but the bottom line is the intended character of the golf course at Tacoma C&GC became compromised.  As the trees grew, the course developed some narrow corridors which limited players options off the tee but worse, shaded the turf which resulted in less than satisfactory playing conditions on many of the greens.  Today most of the shaded greens have been addressed with tree removal and now as the new Master Plan depicts, more trees will be removed to improve turf quality and make golf more interesting.  Another huge component of the plan is additional native areas.  These areas will not be mowed but once or twice and year, be un-irrigated, and receive minimal chemical input if any.

There are many interesting projects on this plan which I will talk about in this blog as time goes on.  For now I will touch on two things that you will see immediately.  I'm talking about a complete bunker remodel and the mowing in of the teeways. 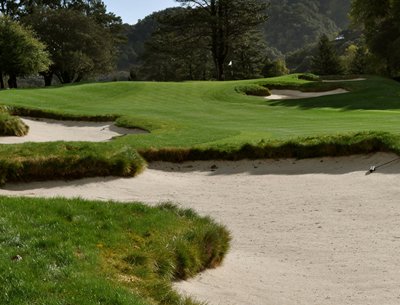 This image shows some of the recent work by Harbottle.  This is similar to what we will be doing at Tacoma but not exactly.  Harbottle will create a unique style just for Tacoma but I know for sure we will have some rough edges that give the classic old look.  After all, if we're going to say we're the oldest country club west of the Mississippi, we should look like it.  Since we're getting a late start this year, we will only do a half dozen this spring so as not to disrupt things too much.  Doing just a few is better than nothing however since it'll give us a chance to show what the bunkers will look like and also show how much better new sand will play.  If anything it should get everyone excited about the new Master Plan and the idea of finally having the bunkers fixed.  Construction will begin on or near May 7th and the bunkers being reworked include those on 16 green, 6 green, and maybe 11 fairway if the weather cooperates.  We will rebuild approximately 15 bunkers  this fall so as to have about 1/3 of the course complete this fiscal year. The Committee will decide which bunkers to focus on this fall but I imagine we will more than likely start at the beginning by doing those on 1-4.

Now just a moment ago I mentioned you will immediately see the mowing in of the teeways.  What is a teeway?  It's my word to identify our new fairways which will include the teeing ground.  Below is the legend of the Master Plan.

Notice how the plan says "make tees extensions of fairways". 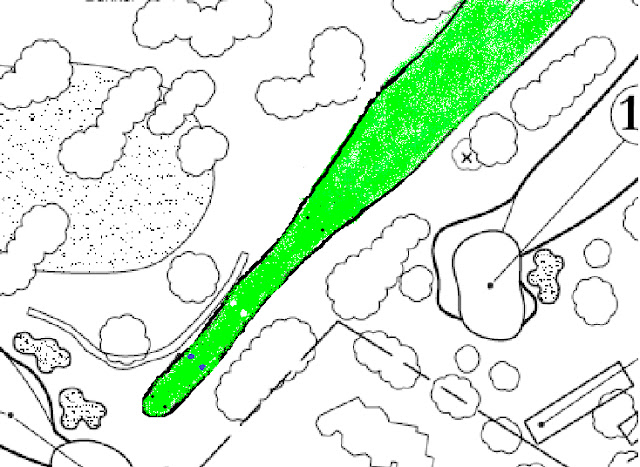 The image above shows the teeway concept applied to the 12th tee.  Why are we installing teeways??  First of all it is a huge time saver.  We will basically be mowing the tees with fairway mowers instead of walking mowers.  This will free-up one of our greenkeepers to do something else more important each time we mow fairways and tees. It also eliminates a lot of turning of machines between tees and around tees.  This not only makes our rough mowing more efficient, but it means less wear and tear on the turf and machines.  We will have better turf conditions throughout the teeing grounds and at the beginning of the fairways since machines won't be turning in those areas.  I also want to point out that the teeways will simply  look amazing!!

So now you know why we are doing what we're doing on #12 right now. 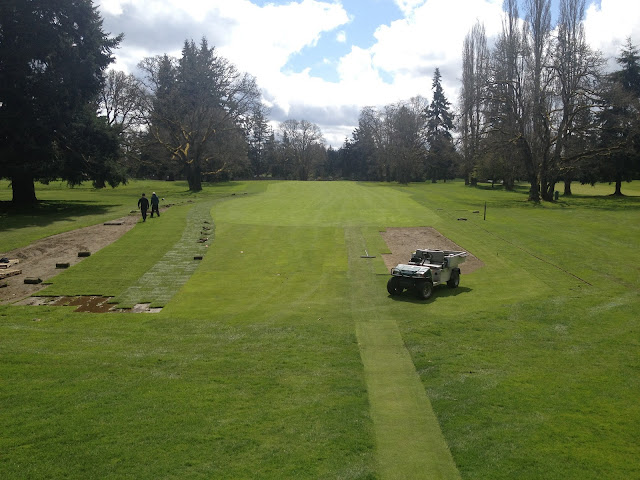 You can see on the left side of this picture that we have sodded in the edge of the new fairway.  We did that here because we needed to replace all the sod we used from here to fix those wet areas this past fall and winter.  We will not do this in all areas right away but we will mow in the new teeways by scalping the turf at each mowing until we have all the teeway area established.  So now you might understand why #7 looks like this. 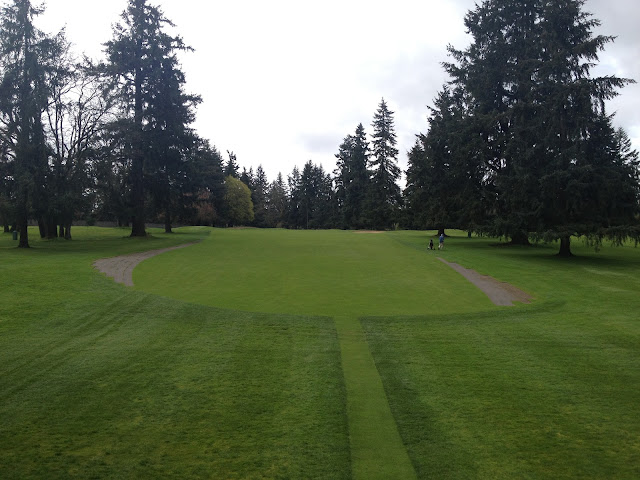 You can see the new edge of the teeway at the beginning of this fairway.  We utilized some of the nice short mowed poa sod from this fairway to create the runoff behind #7 green and repair the front of #12 fairway.  What I'm trying to show is that we don't want to waste the sod in those areas that will be rough when the teeways are mowed in.  Fine poa fairway height sod is priceless. 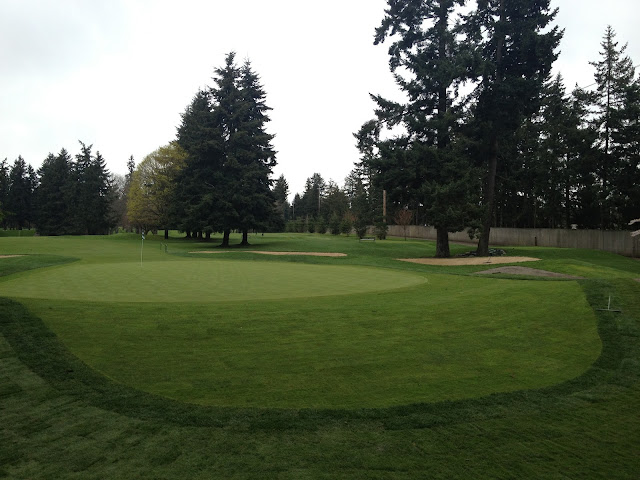 Here is the back of #7 green.  We created this runoff using fairway sod.  There is a lot of these areas to be installed per the Master Plan.  Over the next couple weeks, you'll see the teeways start to develop and if we have time, sod will be removed in some areas to create the new runoffs and runons.  Please check the blog often to see how we are progressing on the new Master Plan.

Lastly, remember we were working on eliminating the cart path on #12 tee. 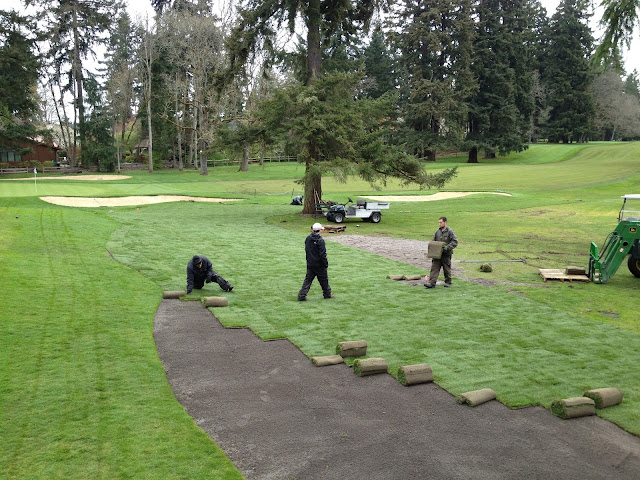 Today it looks like this.  You can't tell we ever had a cart path at all.  I love this!! 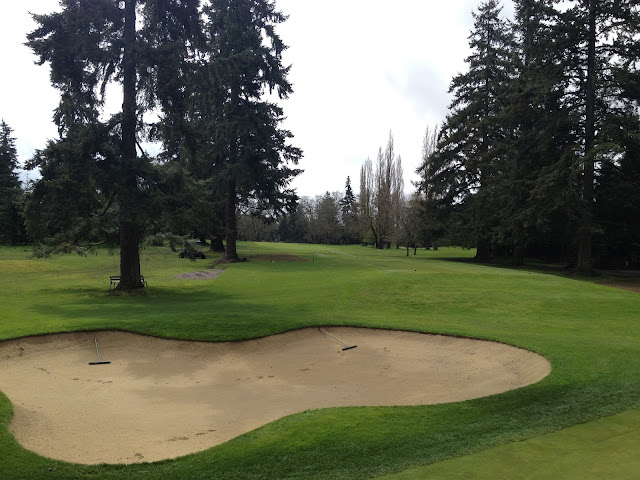 Posted by Joel Kachmarek at 8:07 PM