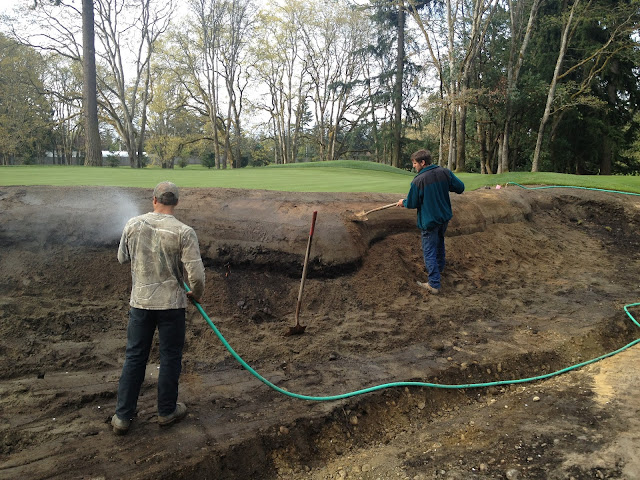 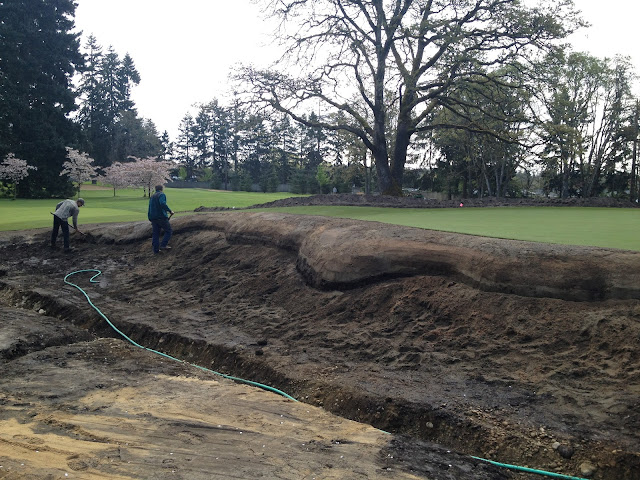 A week ago today we started the bunker remodel per the new Master Plan.  We probably wouldn't have started if we knew the weather was going to continue to be be wet but the forecast looked good so we decided to get started on a few bunkers.  There was no way to know that the weather was going to turn into one of the best stretches I have ever seen in May.  Things couldn't be going better.  It's going to be 80 degrees this weekend and nice through next week so everything looks good for getting this first set of bunkers done.  Above you see the Ridgetop Inc. guys making the final touches on the shaping of the bunker to the right of #6.
Below is how it looks today and it's hard to imagine anyone not getting excited about this.  Harbottle is not holding back on the strength of this bunker design.  These things are like none other I've seen. 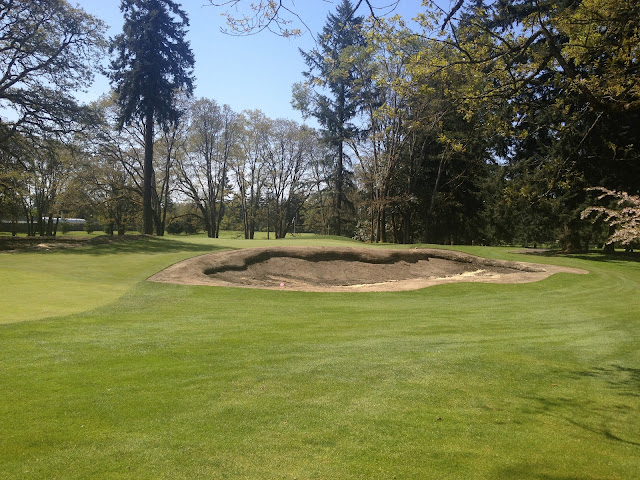 Here's how the bunker on the left side of #6 green is looking. 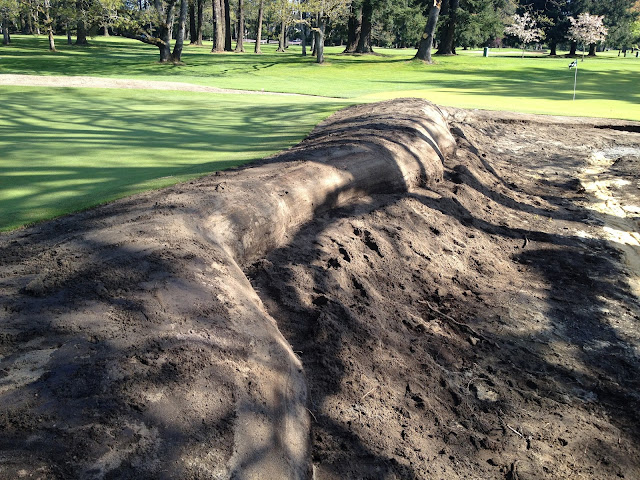 Interesting is as we started to excavate closer to the green, we started to see layers of sand.  Here is a close up the bunker face showing sand layers.d 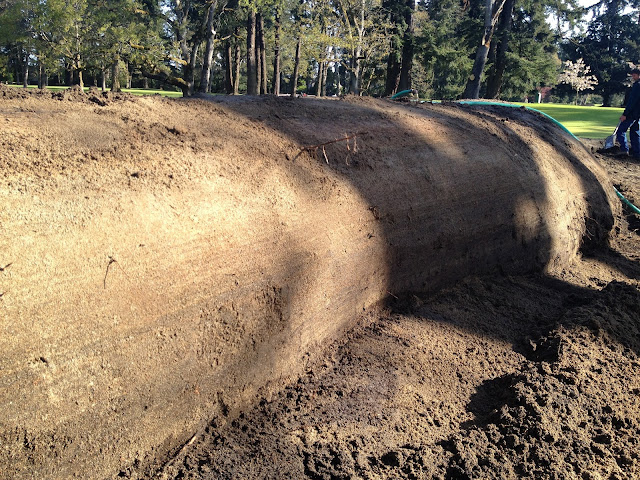 Just like growth rings on a tree, there are distinct layers of sand that depict golf seasons.  In other words, each layer is a season of sand being top-dressed, and or blown out of the bunker by golf shots and leaf blowers.  I counted about 60 layers which dates back to when architect Vernon Macan did some bunker revisions on the course.  There is at least a foot of elevation that occurred in this spot since the last major renovation or maybe even since the original green elevation was established.  Currently I am unaware of the date this green was built.    The 1923 diagram of the course shows this green at least 100 feet east of its current location and the 1941 aerial shows it where it currently is today.  So all we really know is this putting surface is at least 75 years old and to my knowledge it has never been rebuilt.  The new bunker left of the green is now moved away from the oak tree and closer to the green, so the tree won't actually be in the bunker anymore. Anyway, the construction phase is going great and as expected, we are learning as we go.  Part of the learning is knowing that we are going to have challenges.  One of those is that the wood stave water pipeline installed in 1923 is giving us fits on #16. 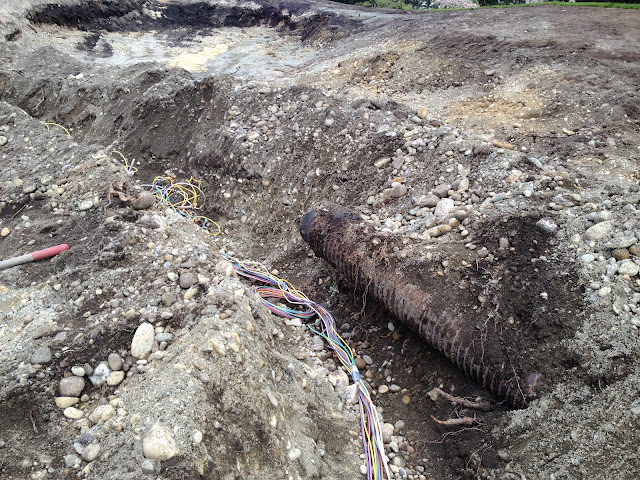 This section of wood stave will be buried when we're finished but it is right where we have made a cut in the earth so we almost pulled it out.  It can stay now that we've established a finish grade that is a few inches above it.  The picture above also shows the gravel nature of our soil.  For this reason, some of the new bunkers edges are being shaped out of imported soil.  The gravel and rock does not pack well and bunker edges made of this material are crumbly.  Even with the imported soil, it is important to know that some of these new bunker edges will not support your weight until grassed in so please do not step on the new bunker edges.  Ball retrievers have been placed out there for you to use for retrieving your ball out of the bunkers that are under construction.  Please use them. 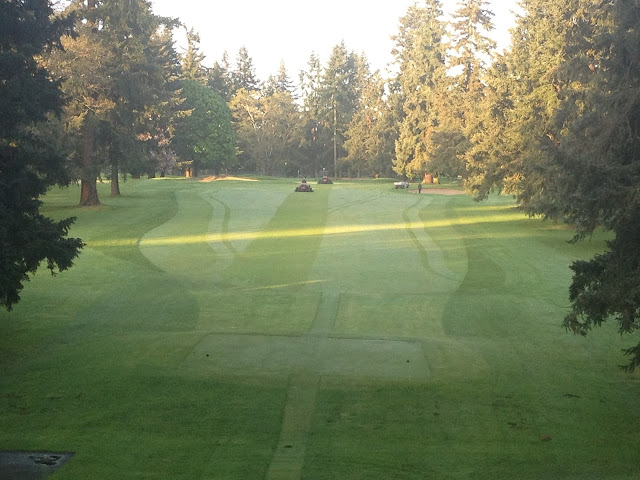 Everyone is talking about the bunker remodel but it seems like there is at least as much talk about the teeways.  Today it looks like everyone is really getting the idea behind the teeways.  The good weather has given us the chance to get out and mow them down so it's pretty obvious what's going on. Above is a pic of  the teeway on #7 and below is a couple of pics of the teeway on #15. 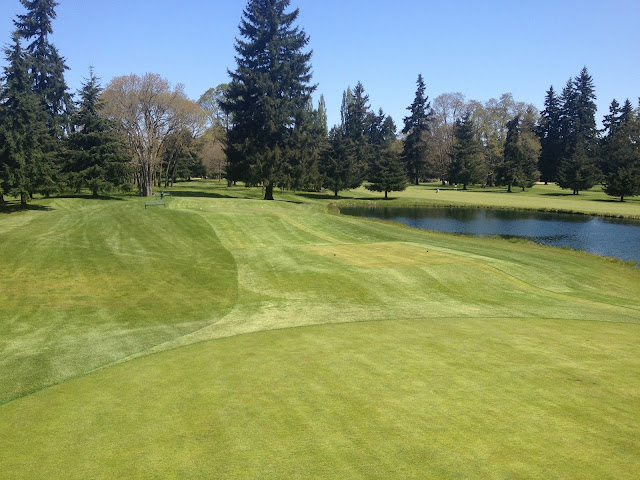 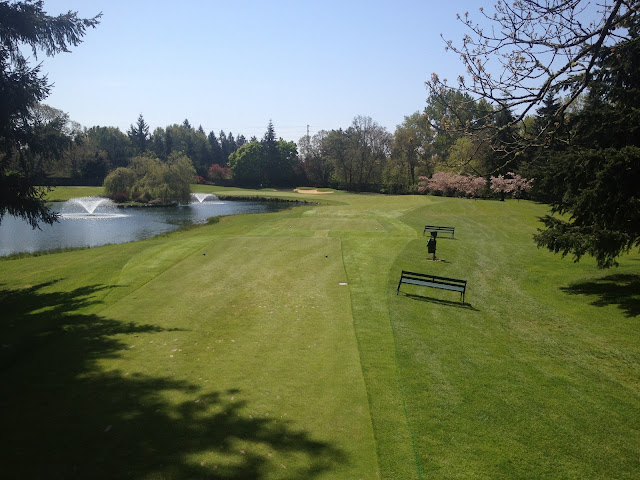 I love the way it is looking. This first step is a mowing height of 3/4" or 750/1000.  Now that we are getting them established, my hope is to have them mowed at 1/2" by June 1st.  If we can do that I think they will look really good this season.  Kevin and Jason have been working really hard scalping these things down.  There is a lot of blowing involved as you can imagine.  Here is a video of Kevin scalping in a teeway.

Posted by Joel Kachmarek at 9:24 AM