Taking the Bite Out of the Bark 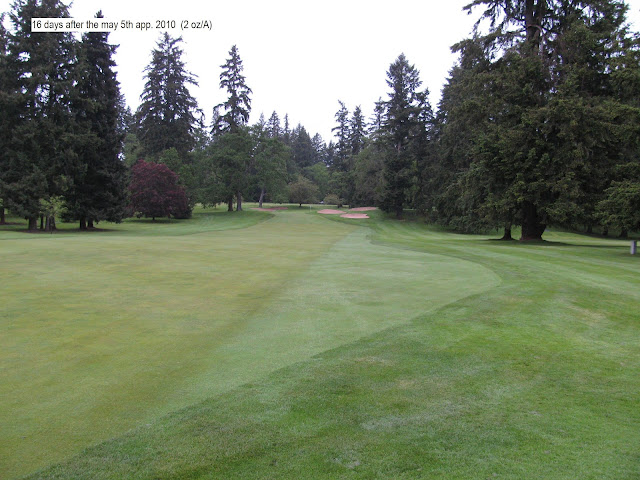 I get asked all the time how we have the greens rolling 12 -13 on the stimpmeter every single day.  Most of the time I say "If I tell you, then I'll have to kill you, because it's a secret".  Really that isn't true at all.  Anyone that knows me knows my secret is simple...........I cheat!  I just keep the greens regulated with embark.  The photo above shows just how powerful embark is as a plant growth regulator (PGR).  The photo was taken 16 days after embark was applied to the 16th fairway at 2 oz/Acre.  It's not supposed to look like this, obviously my operator, who shall remain nameless, forgot to spray the right side of the fairway.  Now if Doug would have remembered to spray the right half, you really wouldn't notice the difference because the turf on the left doesn't look that bad.  The discoloration of the turf lasts a couple days and then interestingly the color change reverses and the turf sprayed with embark is greener and more beautiful than the turf that was untreated. 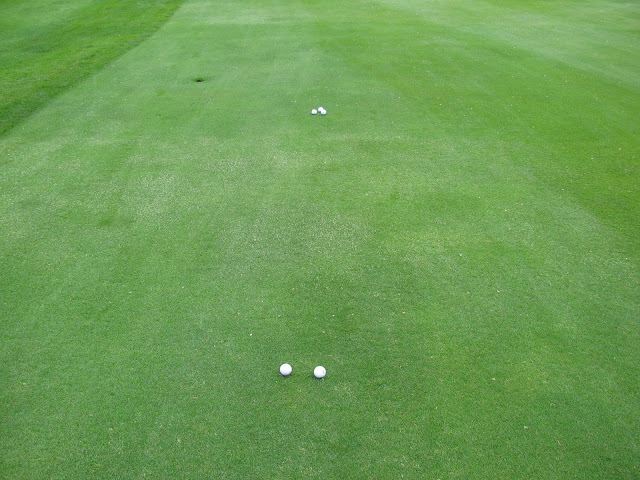 Above you can see this phenomenon.  The photo was taken 25 days after the turf was sprayed with embark.  Actually the turf in the bottom of the photo was not treated at all.  This was on the third fairway back in 2009 and this photo was part of my first trial with embark.  The turf the two balls are sitting on was untreated while in the top of the photo, you can see the turf that was treated is actually greener since this is after the discoloration has gone away.  The turf in the top of the photo is definately greener but since it was treated, there is also no seedhead so it looks even more green simply because of the lack of millions of white seedheads.  So this is why we spray embark.  It is the best seedhead suppressor I've ever seen and turf that is treated with embark (or we say turf that has been "barked") stops growing for about 28 days. 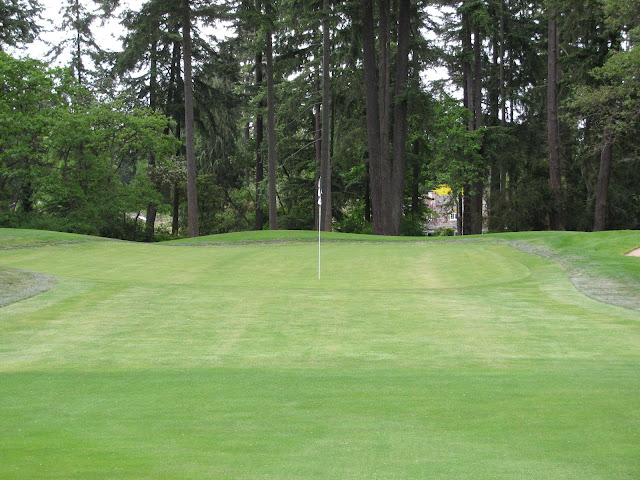 So this photo shows why most people choose NOT to spray embark.  This photo was taken 19 days after the application and the discoloration or bronzing of the turf is at its peak.  On day 23 following the application, the discoloration was gone, the turf was free of seedhead and still not growing.  So while the turf is under the influence of embark, it grows astonishingly slow.  So slow in fact that we do not have to mow greens but maybe every other day.  The greens speeds never really change since the turf is in a state of comatose. The speed in the morning is the same speed as in the evening.  We only mow to really just clean up debris on the greens that has fallen out of the trees.  If we want crazy speeds then we will roll.  Speeds of 13 to 14 are pretty easy if you want them by mowing and rolling. 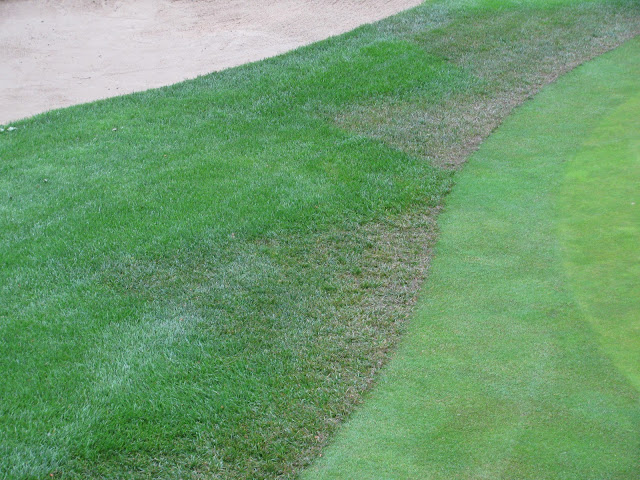 So why not just keep the greens barked all the time??????  Because turf that is not growing, is also not recovering.  Any areas with high traffic can get worn down to dirt, and the roughs around the greens take a real hit.  This is the "bite" of the embark applications.  The above picture shows overspray of embark into the surrounds of the putting surface.  Notice that  the putting turf looks awesome in this photo.  This photo was taken after three consecutive applications of embark spaced out at 14 day intervals.  After the first application, the negative bronzing effect is no longer an issue but after multiple applications, the roughs can no longer tolerate it.  I took this photo last year and made a commitment to come up with a solution so that this year we can keep the greens barked. I needed to find a way to take the bite out of the bark.  It's pretty easy to see why I want to keep them barked.  They look great, they putt amazing, and we save so much labor by not having to mow them.  Fairway turf regulated by embark is even more amazing considering labor savings.  Mowing fairways once a week is more than adequate when they are barked.  Also, the turf just seems healthier most of the time.  We never see fusarium while under the influence of embark because there is no juvenile growing tissue to be infected.  In fact, ever since I started spraying embark back in 2009, we have had no real disease issues period. 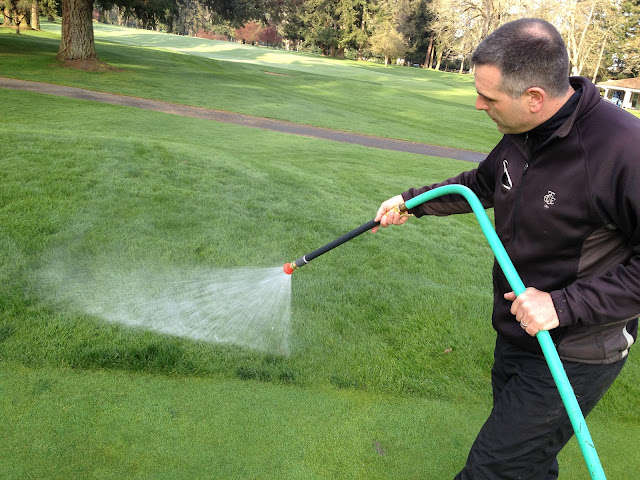 So here is my solution to the bark bite.  I wash the spray off the turf in the roughs.  The picture above was taken just seconds after the green was sprayed.  It's best to get the spray off the roughs as soon as possible. This new technique has worked very well.  So well in fact that I'm thinking of doing this with all applications made to the putting greens.  By eliminating the response from spray to the surrounding roughs, my surround turf looks better than ever, and more natural.  Here is a picture of the first green I took yesterday.  Currently we are 12 days out following the fourth consecutive application of embark.  Our greens have been 12 or more on the stimpmeter every day since we started our first application back in April.  As you can see, the surrounds look great.  Now I'm wondering when to get off the bark..............if ever. 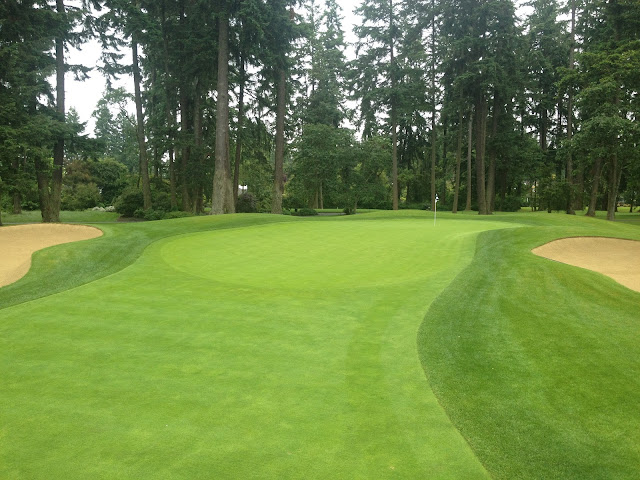 For sure I will have to stop spraying embark at least 30 days before aerification so the greens will recover from that process before winter sets in.  So I'm guessing some of you are thinking I am totally crazy for making all these embark applications, and  the wash off technique seems like an extra step that isn't worth it. Let me just say, if you have pure Poa greens, your the crazy one for NOT trying embark at least once.  BUT do not do it without washing it off the surrounds.  AND make sure you play with it on your nursery first so you know what your getting into.  It is a powerful chemical and one that has totally changed my practices forever.  I don't know what I'd do if I didn't have the luxury of using embark in the spring for seedhead control and unbelievable putting surfaces. It really is like cheating. Here is a short video of me washing it off the surround of the 11th green.  In the background you can hear the sprayrig running as this is done immediately after the spray is applied.  The total time for washing it off this one green is under 3 minutes.  A small price to pay for having the greens barked.

Posted by Joel Kachmarek at 9:20 AM