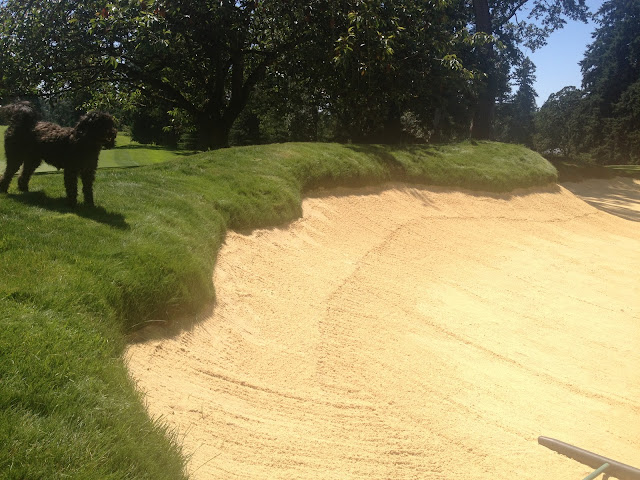 With the new Harbottle bunkers, there is a new term going around the Club, and that is "the Cue" as in fescue.  Many folks now have had the unfortunate buried lie in the Cue.  Today it is pretty benign since we just mowed it down, but a couple days ago I myself was helping someone find their ball in the Cue on 11 fairway and unfortunately we failed to locate it and the golfer suffered the penalty of stroke and distance.  I think the fescue eyebrows are growing a little too fast for cutting them at 2 week intervals.  I'm hoping that the growth slows down but since this is my first experience with the stuff, I really don't know what to expect. What I do know is we can't let them go to the extent of what you saw last week on TV at the Greenbiar PGA tour event.  Balls were getting lost in those bunker faces and even the commentators stated during the broadcast that they should cut those down a bit. Simply put golf should be fun.  It's not fun to miss a green by a foot or two and loose your ball.  So let me show you the process we are currently using to mow the Cue.  What we want to see is a ball coming into the Cue should bounce at least once.  After the bounce, your ball should be out of the Cue or into the bunker.  If by chance your ball comes to rest in the Cue, one should be able to find it and hack it out.  The following pictorial shows Miguel "the bunker doctor", giving the treatment to the Cue. 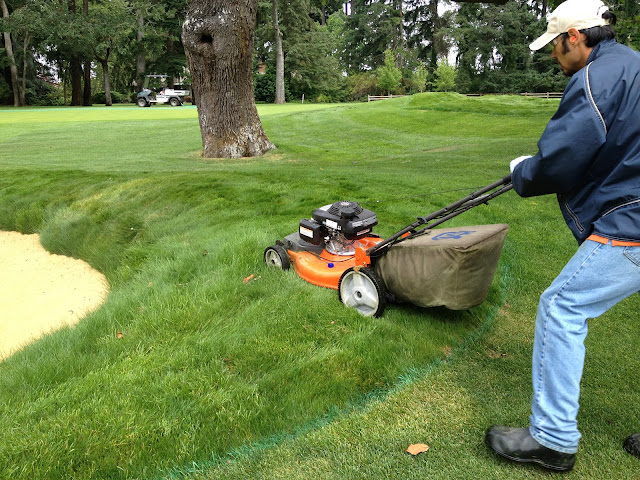 First step is to set the rotary mower at the highest setting and mow all the areas that we can.  This cuts it down to 4 inches.  As we do this, we try and move the mower in and out of the bullnoses with an action that is irregular since the end look is to be "rugged" and not manicured. 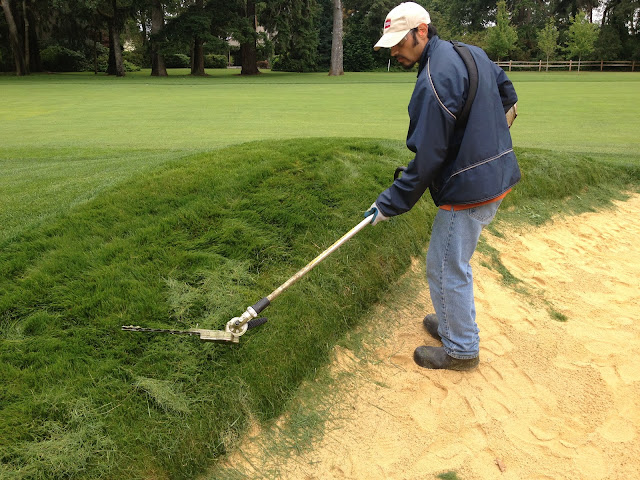 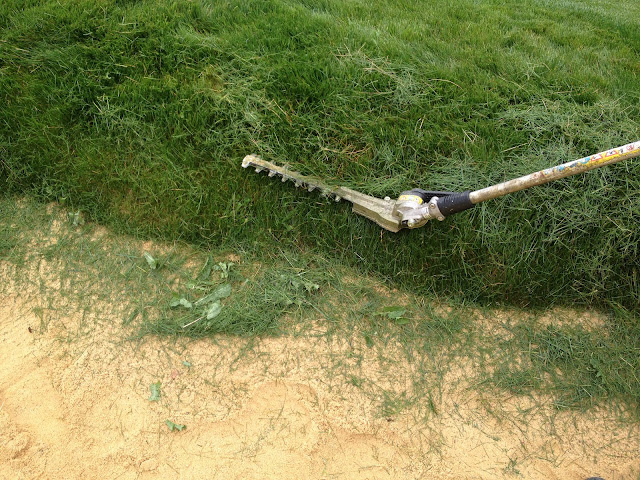 Then using this really cool weedeater attachment, we mow the vertical areas of the bullnose at about 4 to 6 inches and again doing this in an irregular fashion.  Since most of these areas are vertical, balls don't easily come to rest on them so its okay to have some it 6 inches and look really rugged.  Here is video of the "bunker doctor" clipping the Cue with this tool.

After that there is a lot of blowing.  The leaf blades of fescue are thin like wire and they don't blow easy.  It's almost faster to rake it out.  We are still experimenting with this whole process so it may be that we end up doing that way. 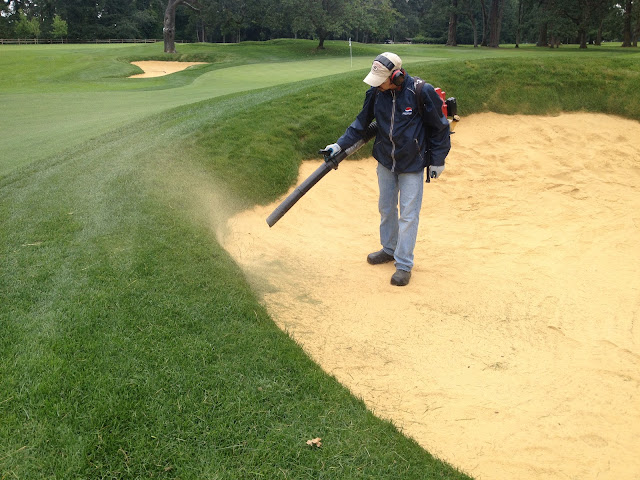 After blowing, of course the bunker is raked.  So following is a couple pics of the final product. 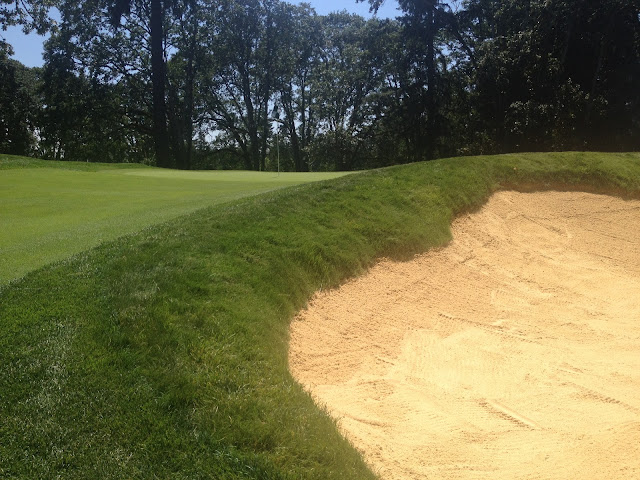 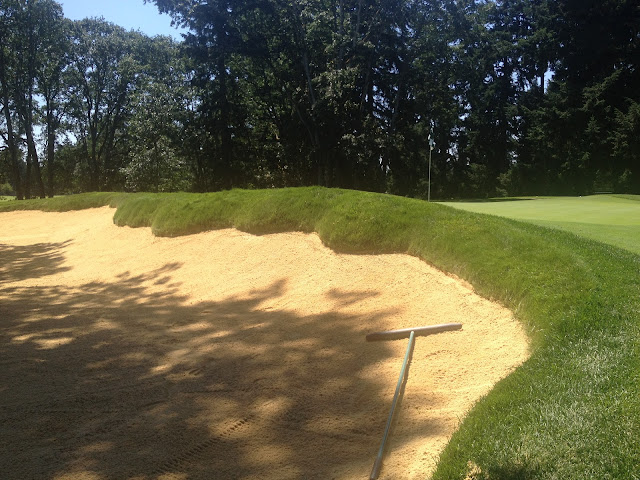 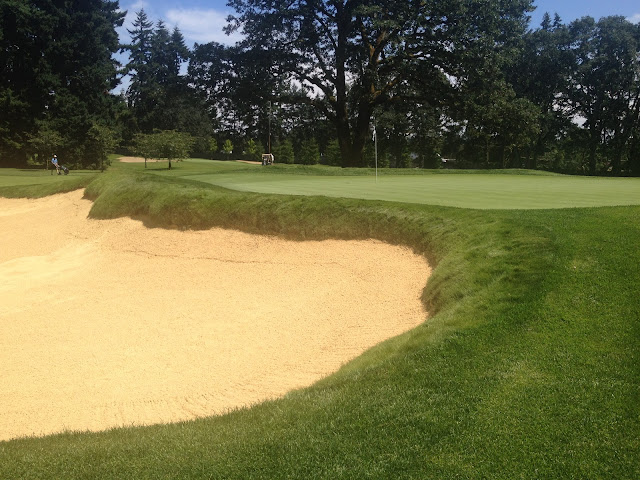 The new Harbottle bunkers are simply gorgeous.
Posted by Joel Kachmarek at 8:35 PM