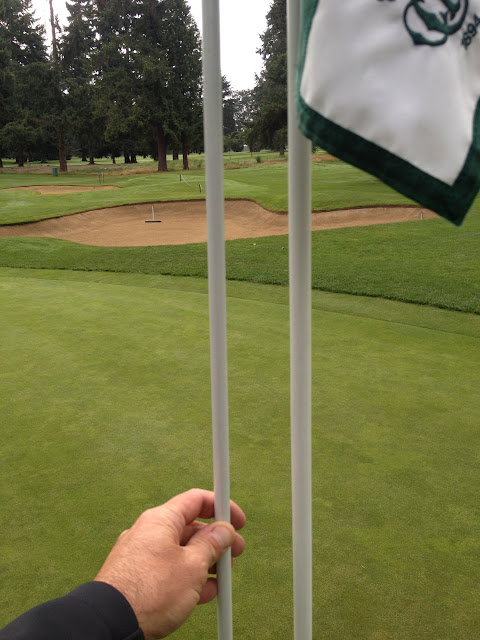 I was playing golf yesterday (yes, that is unusual) and a member in my group while putting from off the green said, "please pull the pin, those sticks are too fat".  You see, at TC&GC we use a 5/8" diameter flagstick like the one on the right side of this picture.  The flagstick on the left that I'm holding is a standard 1/2" diameter and certainly the most common.  Why do we use the fatter flagstick? It's simple, they are better in windy conditions, more visible, and mostly just because they feel nice and solid when you pick them up.  So I said to the member, "do you realize how much extra we pay so that you can have these nice flagsticks"?  He said, "I don't care how much they cost, because they're fat, they keep the ball from going in".  Of course we all know that a flagstick never helps a ball go in, but now the question is out there that maybe the fatter flagstick  actually keeps the ball from going in.  Ironically, later in the round the member holed out from 170 yards and I had the last laugh.  I have to say that lately, we have had a lot of hole in one's at Tacoma C&GC.  So many in fact that I'm almost thinking the fatter flagstick helps the ball go in contrary to the belief of some of the members.  It definitely got me thinking so today I tried to answer that question. 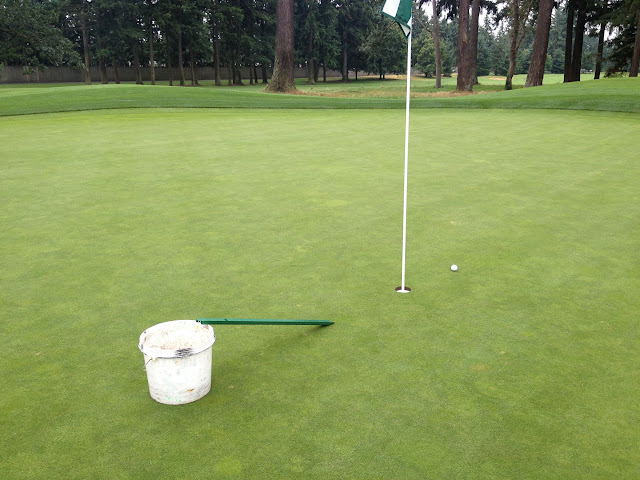 Here is the very complicated apparatus I created to assist me with the big question.  Yes, it's a stimpmeter on a bucket.  So today I rolled countless balls down the stimpmeter ramp from varying distances trying to simulate a ball striking the pin as it would from a golf shot.  Not surprisingly, every ball that struck the pin squarely, went in.  It went in every time on the 1/2" pin and every time on the 5/8" pin. So I tried to simulate the ball striking the pin NOT squarely.  Now I was able to get some balls to hop out and not go in.  They frequently did not go in on both of the two pins.  Sometimes they dropped in, sometimes they did not.  I finally found just the right angle to where the ball struck the pin NOT squarely but yet went in the cup every time on the 5/8" in pin.  That same angle resulted in some balls not going in on the 1/2" pin.  Following is a video of this trial on the 5/8" pin.
Now here is a video of the exact same angle and distance on the 1/2" pin.  Notice all the balls go in except for one.

So in the end, although there are many untested variables, I honestly feel that there is no statistical difference between the two pins and the incidence of hitting the pin and holing out.  I still firmly believe that a flagstick never helped a ball go in, so I personally will continue to ask for the pin to be removed.  But as for the question of whether a 5/8" pin keeps the ball form going in, I would have to say that there is no evidence to support that claim and in fact, I personally believe that the fatter stick actually helps the ball go in.
Posted by Joel Kachmarek at 10:25 PM

Email ThisBlogThis!Share to TwitterShare to FacebookShare to Pinterest
Labels: just because