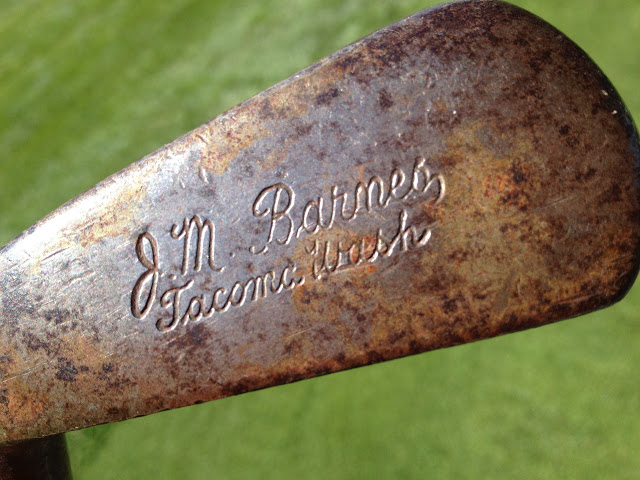 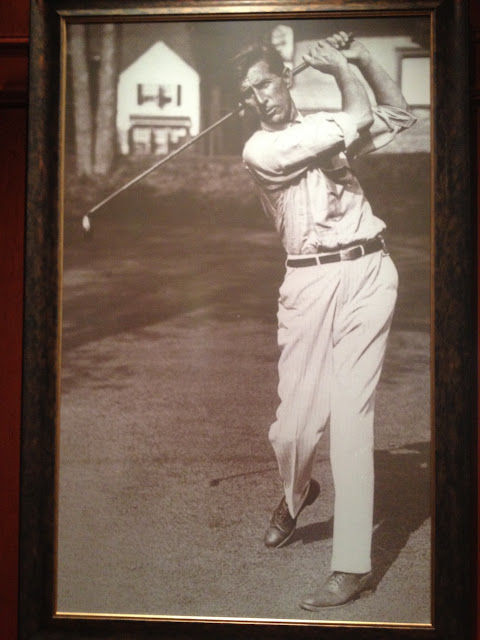 Jim Barnes is considered as one of the top ten greatest golfers of all time that nobody ever talks about.  Born in England in 1886, he was like many golfers in his era, he grew up working as a caddie and was a club maker's apprentice.  At the age of 20 in 1906, he turned professional and headed to America.  He was Club Professional here at Tacoma C&GC from 1910 to 1915.  Above is a picture of a picture hanging in the main clubhouse at Tacoma C&GC.  If you have any doubts about his greatness, check out this picture of a plaque at the Club which lists his accomplishments. 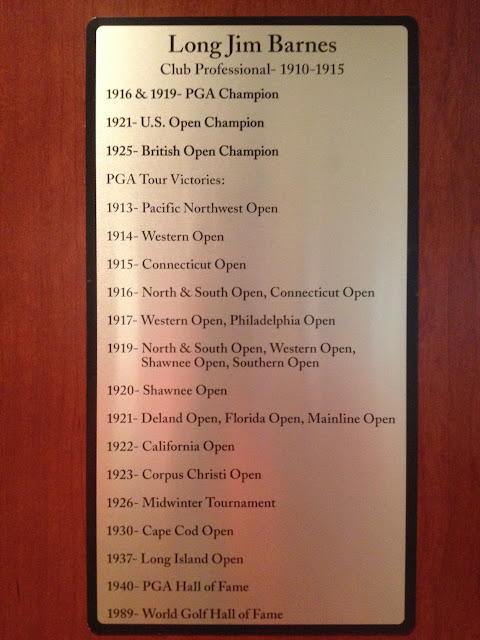 He won 21 times on tour and won 4 majors.  He was a very impressive player and they called him "Long Jim Barnes" because he was very, very tall at 6'4" and very very long off the tee.  Click HERE to see that Barnes is one of the longest hitters of all time.  You can imagine Jim is a big part of our rich history here at Tacoma.  Many also feel that he had a big influence on the architecture of the course since it's been documented that he consulted on golf course design quite a bit during his time.  Anyway, Jim is a huge figure at Tacoma, and in golf history so when I found this golf club on e-bay, I had to have it.   I got it for only 30 bucks so I feel very fortunate. 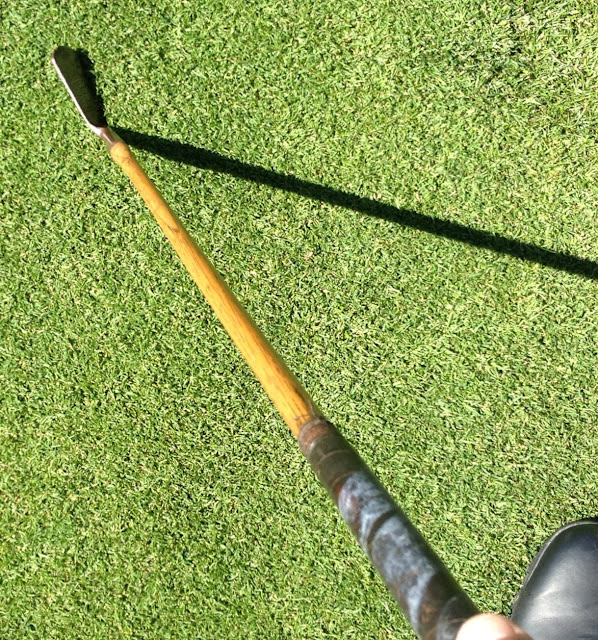 So when this club arrived on my doorstep, I was so excited that I could not contain my emotions.  Here it was.  A golf club made by the late great Long Jim Barnes.  And it was made right here 100 years ago.  Right here where I come to work each day.   The condition of the club was immaculate.  I don't know if the grip was original but if it was, Jim knew how to grip a club.  This club has a very over-sized grip with a soft feel. Most notably, it was a left handed club.  But this was the worst part of the find because of course I wanted to swing this beautiful thing, and swinging a left handed club right handed just doesn't feel right.  No matter.  I still was really happy with my latest find and actually, I knew a great left handed golfer that was a member of the Club, and I knew he would appreciate this find, and therefore I knew I could talk him into hitting it.  I really just wanted to see this club hit again.  So the other day I see this member on the range practicing, and I knew this was  the right time to show him what I'd found. 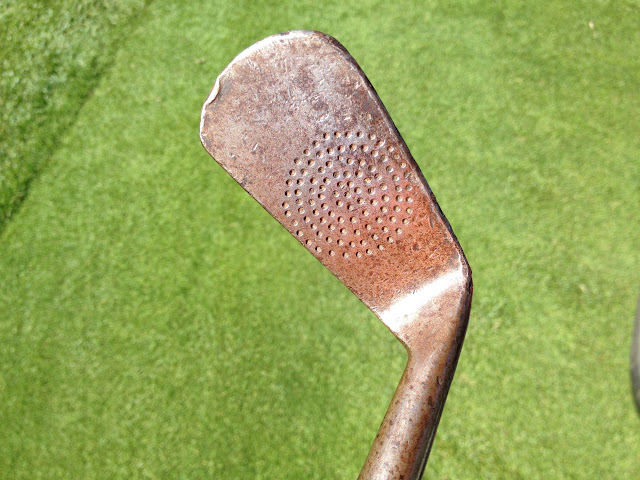 When I showed him  the club and asked him to hit it, he was excited and immediately said "you will see me hit this, but not today".  What I didn't know was that this member was already such an enthusiast that he had an old left handed hickory shafted club and he had hit it.  He had hit it, but he had hit it using the appropriate golf ball.  He informed me that there are many enthusiasts today that play with hickory clubs and using golf balls that are from the hickory shaft period.   He had a sleeve of these balls and agreed to bring them on another day to hit the Jim Barnes golf club. 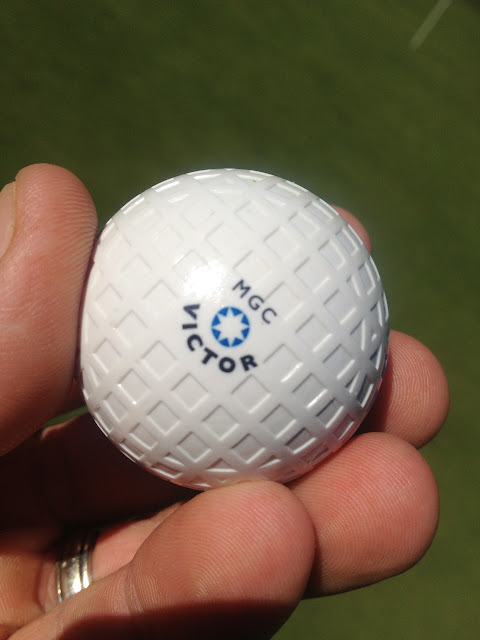 Sure enough.  A couple days later, he brings these new golf balls made from the same molds that were used during the period hickory shafts were played. They are 60 compression and that is the main reason they are suitable for hitting with hickory.  Apparently balls made today that are 90 and 100 compression are too hard and can split the hickory shaft.  So anyway we were ready to go hit the Jim Barnes golf club.  By the way this left handed club is not the only Jim Barnes club in our possession.  In fact we recently acquired a right handed Jim Barnes golf club which I knew was sitting in our General Manager's office.  Reluctantly, our GM let me take it out.  Of course he was reluctant since he figured I might break it.  I admit I was nervous but  I figured if I just tried to hit a shot at half speed, it would be no big deal.  I mean really both the right handed club and the newly acquired left handed club looked and felt like they were in mint condition.  I figured Jim Barnes and many like him had swing speeds faster than mine and I've never heard of hickory shafts breaking so it should be just fine. 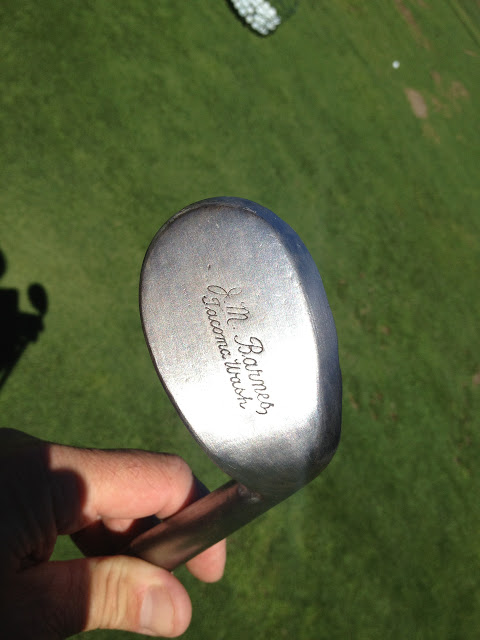 Here is a picture of the right handed club.  Unfortunately someone polished the rust off thinking they were restoring the club but really, clubs from that period always had a little rust so they most likely didn't look this good very often.  Okay so now both my member friend and I set off to hit these old clubs.  We went to the sixth tee which is about a 170 yard shot.  We mainly chose the sixth because hitting into a green with the new golden aged bunkers seemed appropriate.  Below is a video of my friend hitting the left handed Jim Barnes club.  The club is a mashie or maybe a mid-iron so it's just about right for this distance.
Okay that was really cool and this friend of mine is a very good ball striker.  That third shot he hit was very close to the pin and amazingly the ball landed very softly with back spin, similar to what you would see with modern equipment.  Now the next video is me hitting the right handed Jim Barnes club.  This club is like a niblick so it is very lofted and really can't be hit 170 yards.  Also, keep in mind I am not a very good ball striker but I did hit this shot very good.
That was so amazingly fun, and the club felt very solid.  After that one swing I felt very comfortable that the integrity of these old clubs were just fine for playing golf today.  So below is me finishing the hole, complete with bunker shot using the Jim Barnes niblick.  I made 4.
My friend and I had a blast that afternoon and I would say anyone that loves golf history should give this a try.  We're talking about organizing a retro tourney at Tacoma were we get together in the appropriate attire of the period and play with hickory shafted clubs.  I know for sure I'll participate in this one myself.
If you want to get a hold of some hickory clubs and appropriate golf balls, you can get all you need at playhickory.com.  Follow this link http://playhickory.com/default.htm
If you want to know more about the history of the golf ball, check this out http://www.golfballmuseum.co.uk/

Posted by Joel Kachmarek at 7:25 PM