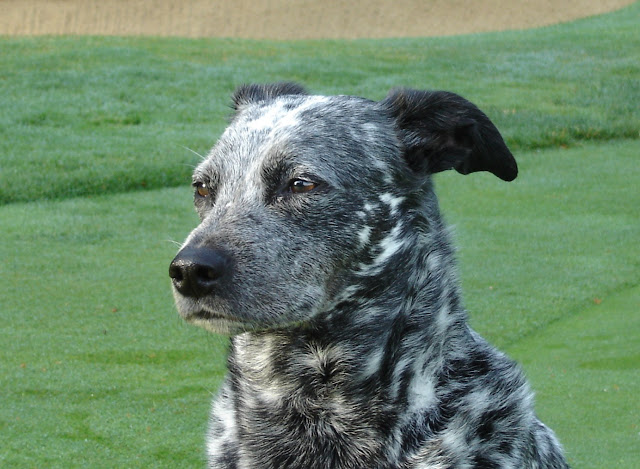 It is impossible to prepare for that inevitable day when you must say goodbye to that very special companion.  Yesterday was that day for me and my family.  Lucy was not only a golf course dog for 12 years, she was an integral part of my family at home.  I met her 14 years ago at the local humane society.  She was so little then.  You could tell that she hated being there in that cold, concrete enclosure.  She was curled up in the corner and all I could see was that she had a very unusual coat.  I saw that she saw me, and honestly she was the only cute dog in the whole place, but I could see that she wasn't adopted because of the sign that hung above the door to her pen.  It read........Australian Cattle Dog Mix - Possible Parvo.  I asked one of the staff about the sign and said "I like that puppy, but what is Parvo"?   The lady explained that Parvo is a disease that is a dog death sentence, and that they have reason to believe the puppy had come in contact with another dog that died from it.  I asked, "how do you know if she has it or not"?   She said, "if the dog is still alive in three days, then she doesn't have it and I'll call you to see if you still want her."  Well..........three days later she did call me and I went to pick up the little, freckled puppy.  I never had any intention of having her come to work with me, but eventually I started to bring her.  The membership at Tacoma C&GC was not sure about this as Lucy was the first working dog they had had.  Lucy had such a sweetness about her that she very quickly became loved and it was just an expectation that if I was around, so was Lucy.  She was very attached to me.  This was nice because I never had to worry about where she was.  She rarely got very far from me and so I really never thought about her or worried about her.  If she couldn't see me, her anxiety got the best of her and she would start to panic and frantically look for me.  This made it difficult to go to meetings or events where having a dog was inappropriate.  No matter, the membership embraced her presence and so she attended many meetings where she would just lay under my feet and not draw any attention.  She was definitely a rare breed.  Well I could go on...............and on............................so  I will...............Lucy earned this tribute. 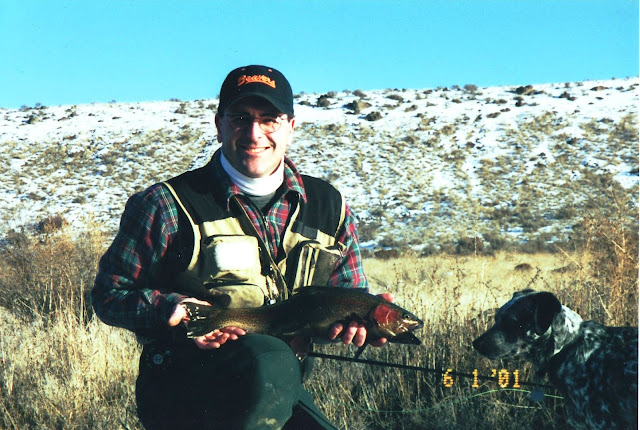 Here is one of the earliest photos of her.  She loved to go fly fishing.  She could not resist trying to bite every fish I landed even though I scolded her for doing it.  I can't remember her ever hurting a fish but she did take out a couple critters in her time.  A priceless memory was early in her career on the course when she mauled a cute, furry squirrel on the first tee, on a Tuesday morning with all the ladies watching.  In horror, I watched Lucy pounce on the varmint and shake it like a rag doll.  This was it, I thought.  For sure I figured I'd get the phone call from the GM and he'd say that Lucy was no longer allowed to come to work.   But no.....................to my surprise, one of the gals came up to me and said "sure is nice to see she also controls tree rats".   The ladies loved Lucy.  It's funny though that everyone thought she was this great goose chaser.  Whenever some one questioned why I was allowed to have this dog off leash, Lucy lovers where quick to say she was a working dog and that she controls the geese.  I'll let you in on a secret, Lucy was a horrible goose chaser.  Sure, she and I would put on the show by going to the pond and herding the geese.  She would impressively leap out of my cart while traveling at full speed, and then ferociously chase the foul into the pond all the while barking and snarling.  But once those birds were on water, they were safe. Yes, Lucy could swim and she could swim really good when she had to, but the only time she had to was while fishing when of course I'd cross the river, and then because she couldn't stand being apart from me, she would have to also cross the river.  Anyway, although she wasn't good at chasing geese, she was good at barking at them, and apparently that was enough since geese have never been a serious problem since Lucy started coming to the course.  Because she was latched on to me, it was hard to get pictures of her.  This picture below I got because she was distracted and had her eyes fixed on something in the distance like a crow or squirrel. 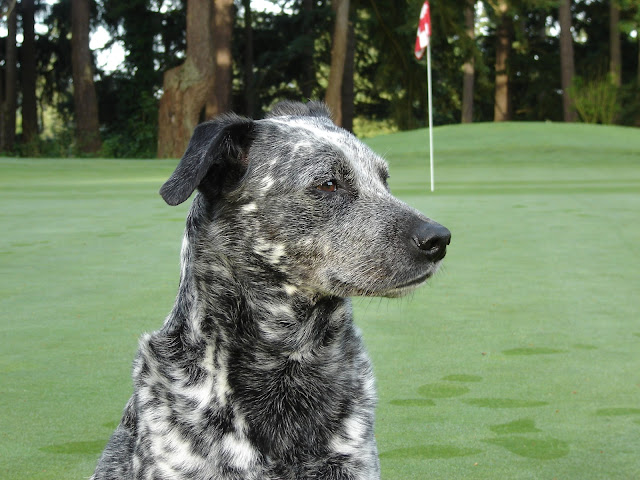 This is the picture that got into the Lebannon calendar for golf course superintendents and their dogs.  She was Ms. February and I think the year was 2006.  Since where I went, she also went, I did get a few pics of her on accident over the years and so I'll just share some of those now.

This is a picture from 2005.  I was documenting an old oak that had fallen over.

This one is from 2008.  Lucy is inspecting a ditch during the clubhouse addition project.

Here is another one where her and I are looking at a ditch in 2008.  Her ear always got bent over like that.

Here's one from 2006 and it's another picture of some trees that I want to cut down.  This is about as far from me as she would ever get.

This one is from a powerpoint presentation where we discussed removing the tree under the arrow.  This was when we were preparing for the U.S. Girls Junior Championship and the USGA suggested we remove it because they thought it would simply make the hole look better.  We debated this for hours and hours, and weeks and weeks.  It was decided  to leave it.   Funny that a few months later, in the wind storm of 2006, this tree blew over on its own.

Here is Lucy again inspecting some work going on for the 2007 U.S. Girls Junior.  She was really in her prime during this time.  Healthy, strong, and fast.  She could ride anything.  Whatever I did, she went along.  She rode fairway mowers, tractors, trim mowers, and whatever else she had to ride on to go where I was going.

Another picture of ditch inspection.  I really have a lot of pictures of ditches.

Here's one from 2009.  I was taking pictures of shade damage.  Ironically, the next year, all those trees in the background were removed to install the sewer line.  Shade is no longer a serious problem here on #7. 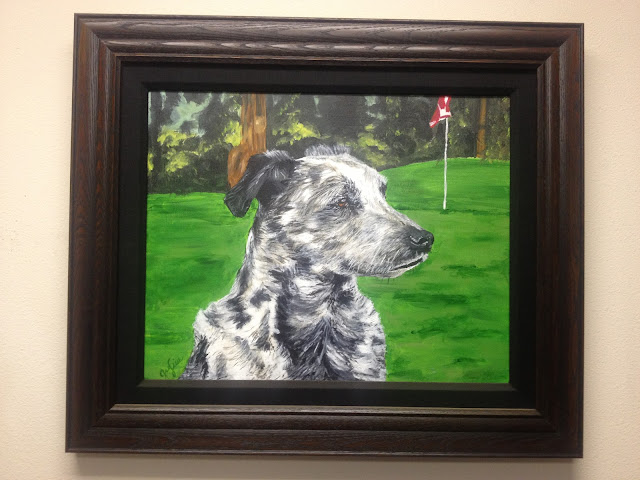 Lucy retired in 2010.  The long days at the course were getting to be too much for her.  My wife did an awesome job of taking care of her at home but she had thyroid problems, and other issues internally that were starting to make it difficult to walk and enjoy life.  A couple nights ago she looked at us as she struggled to stand by our side, and we knew.  Lucy was laid to rest in a very peaceful moment in our living room at 4 pm yesterday afternoon.  Myself, my family, and all those at the Club are truly blessed that the Lord gave us so many years with her.  It's only been 24 hours since we said goodbye and just now as I was typing this blog, the doorbell rang and the vet has brought her back.  Lucy is home again.  She will never be forgotten. 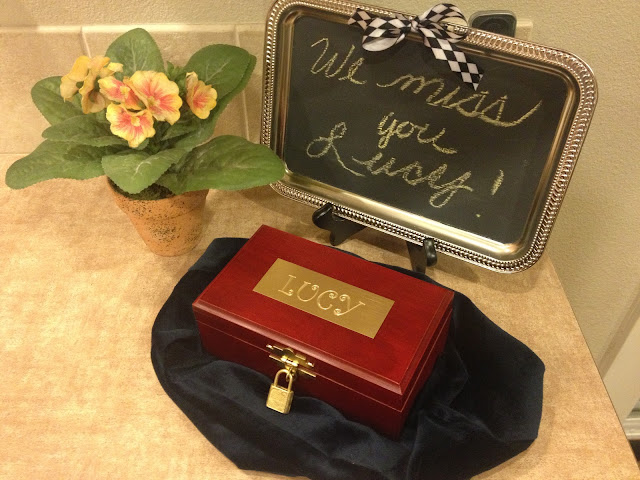 Posted by Joel Kachmarek at 7:26 PM

Email ThisBlogThis!Share to TwitterShare to FacebookShare to Pinterest
Labels: just because, the crew