Friday was a historic day for the Tacoma Country and Golf Club, and that's saying something considering the Club has almost 120 years of history.  Friday we finished rebuilding all the bunkers (okay the practice hole is still under development......more on that to come).  I know a lot about this Club's history and I think it's safe to say this is the first time all the bunkers have been remodeled in entirety.  Before this project, bunkers at Tacoma were renovated in phases, and under the guidance of several different architects.  Many bunkers were built or renovated without the guidance of an architect.  In addition, the quality of sands has changed throughout many of the improvements in the past.  For several years, the sand supplied was not produced with adequate quality control and many, many tons left the quarry containing too much silt and clay.  Given that information, one would expect that until now, the bunkers have been very inconsistent.  Well today, all the bunkers are not only built in the same style, but they are built with very good quality control and should play with excellent consistency.  These last couple of days have been pretty frantic as we prepared for the bunker sand installation.  In just two days, 23 bunkers were backfilled.  They are all beautiful but check out these pictures of some of my favorites. 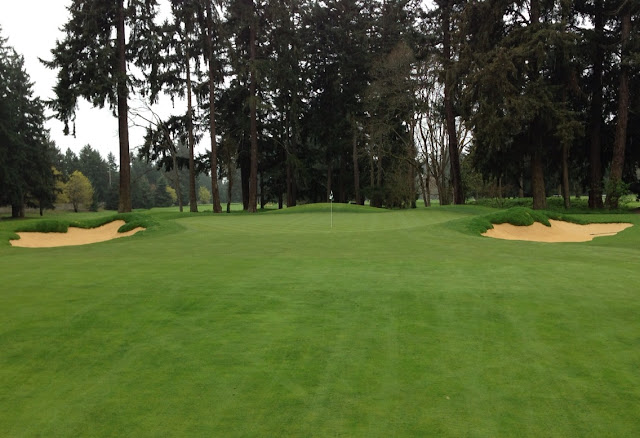 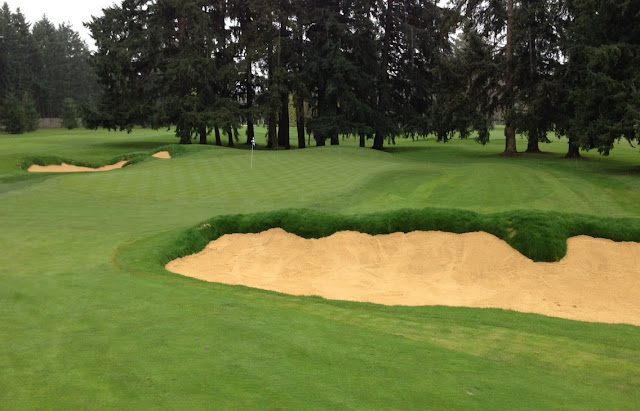 This is the green on #4 and this bunker in the foreground is already catching a lot of balls and irritating people. 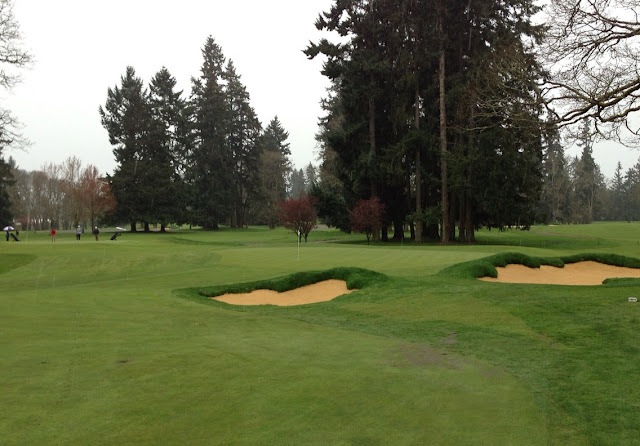 The pair of bunkers fronting #10. 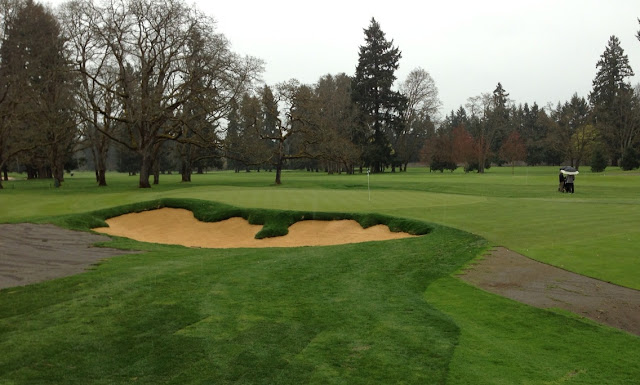 The large bunker left of #17 green 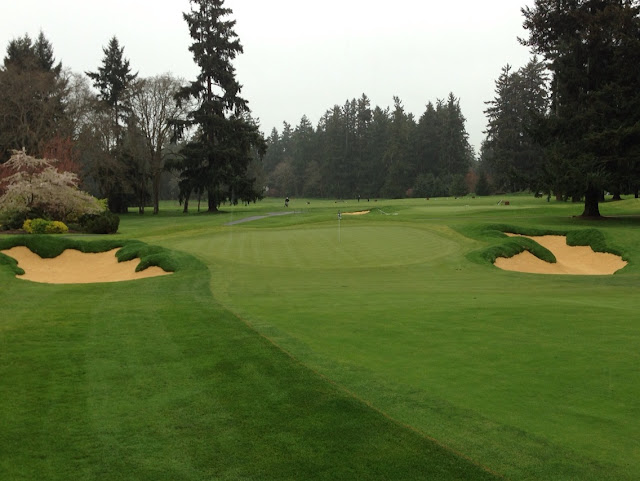 These two on #18 green turned out amazing 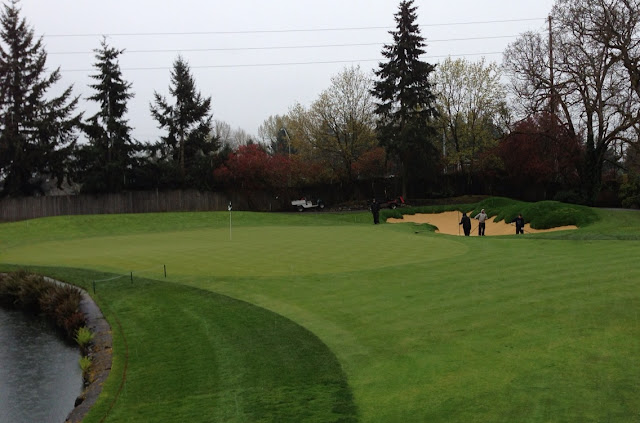 This is #15 green and this bunker was the last to get backfilled.  The crew is pushing real hard in this picture to get finished. 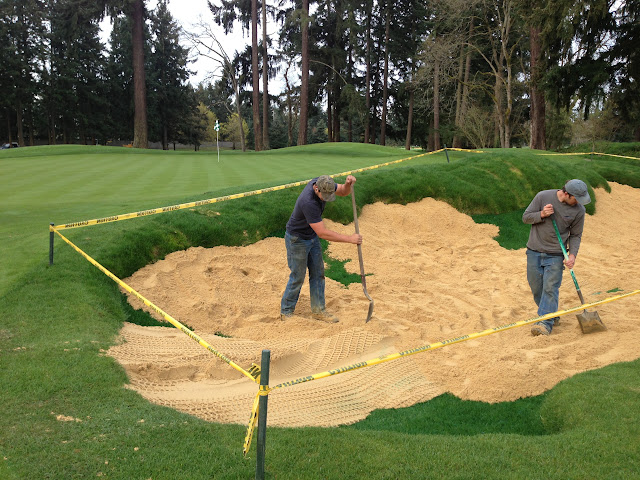 Here's a picture of Kip's guys moving sand.  This was hard work and these guys did not slow down.  I'm so thankful for the effort by the whole team to get this job done. 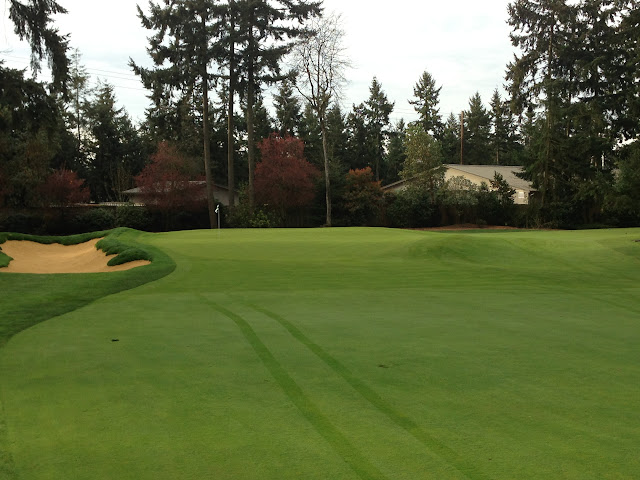 In addition to building bunkers, don't forget we filled in 14 of them along the way.  Here's #2 green and the bunker is impressive but now everyone loves the right side where a bunker was removed.  It really  turned out good. 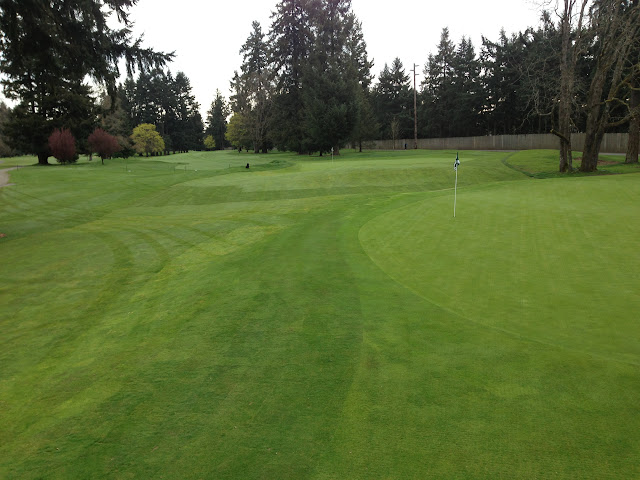 Another area where bunkers were removed.  This is the 5th and 8th green, now joined by fairway. 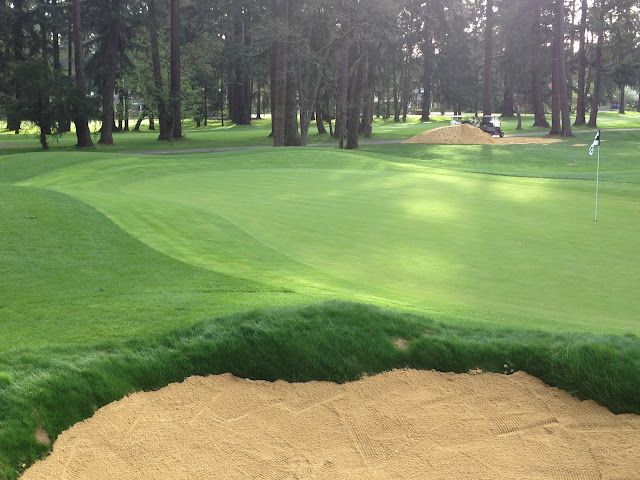 This is a picture of #1 green and the bunkers here are very cool, but I want you to see the new fairway turf wrapped around the green.  This is pretty much what's going on throughout the course.  In fact, there is almost no rough close to the greens anymore except the fescue bunker eyebrows.  People are finding this kind of golf very fun already, but really these areas need a lot of work to get smooth and that's when they will play like we envision. 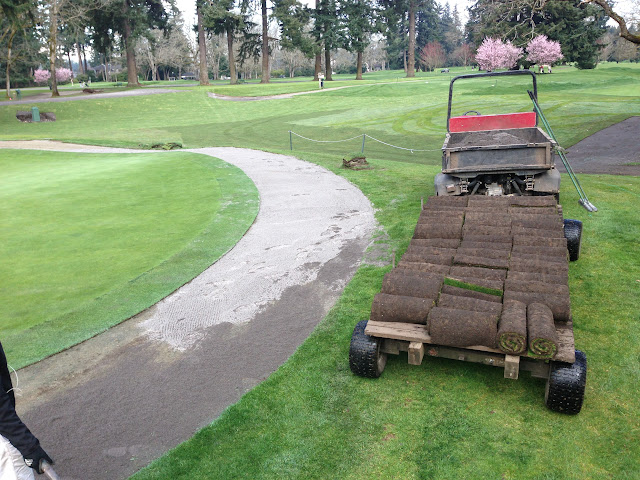 In order to make these fairway wraps really good, we are removing the ryegrass rough around many of the greens and replacing it with poa sod taken from fairway edges.  Taking this extra step will really make it look like these areas have always been mowed tight like fairway turf.  This kind of work will continue throughout this month.  So are we done?.............Kinda sorta.  This started out as a bunker project, but then turned into more of a complete renovation.  YES the bunkers are done, but we have a lot to do before we can just start maintaining so stay tuned.  The last truckload of sod comes in Thursday, and we hope to get all the teeing grounds seeded in the next couple days.
Posted by Joel Kachmarek at 11:43 PM