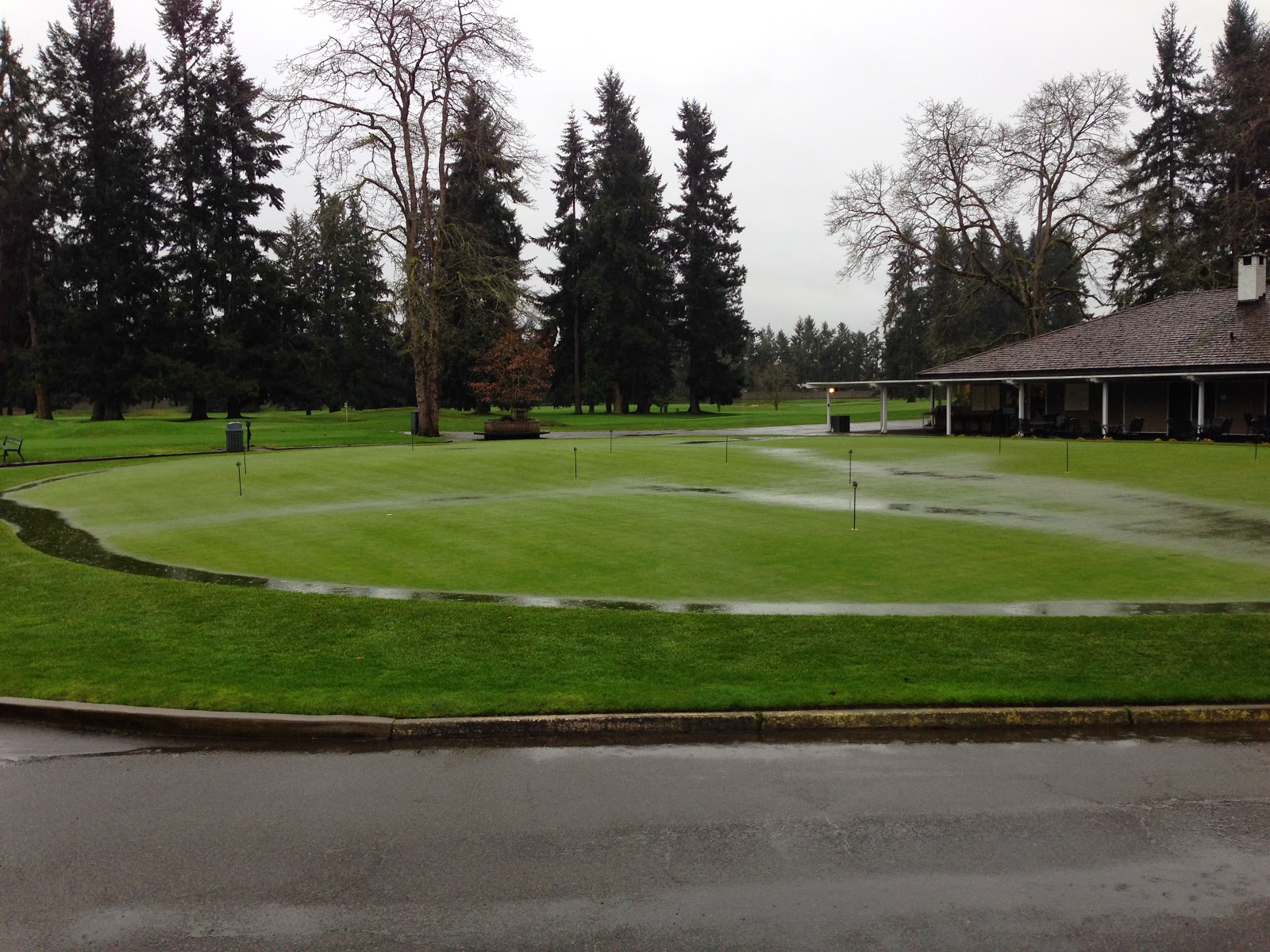 What have we been up to during this dreary winter?  Well, normally during the winter, we get some cold, frosty days when we can take care of some housekeeping but this year we are wet and warm.   Coming off 2014, the 5th wettest year ever recorded, 2015 is starting out as a contender for wettest ever. Today as the rain came tumbling down, we decided to work on some housekeeping stuff since it looks like our cold frosty days are numbered and before you know it, we will be in the middle of the growing season. 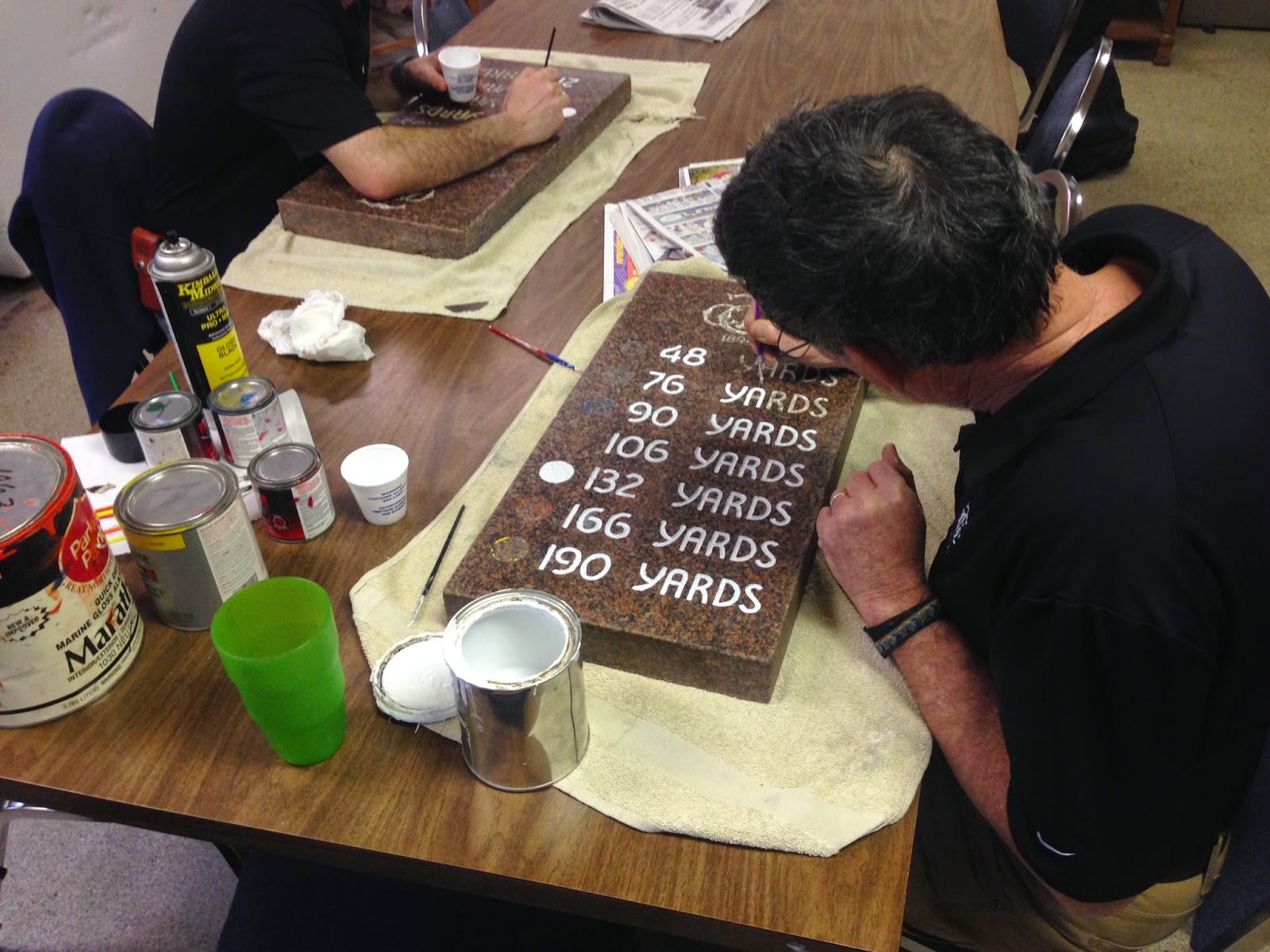 Yardage plaques are getting painted. 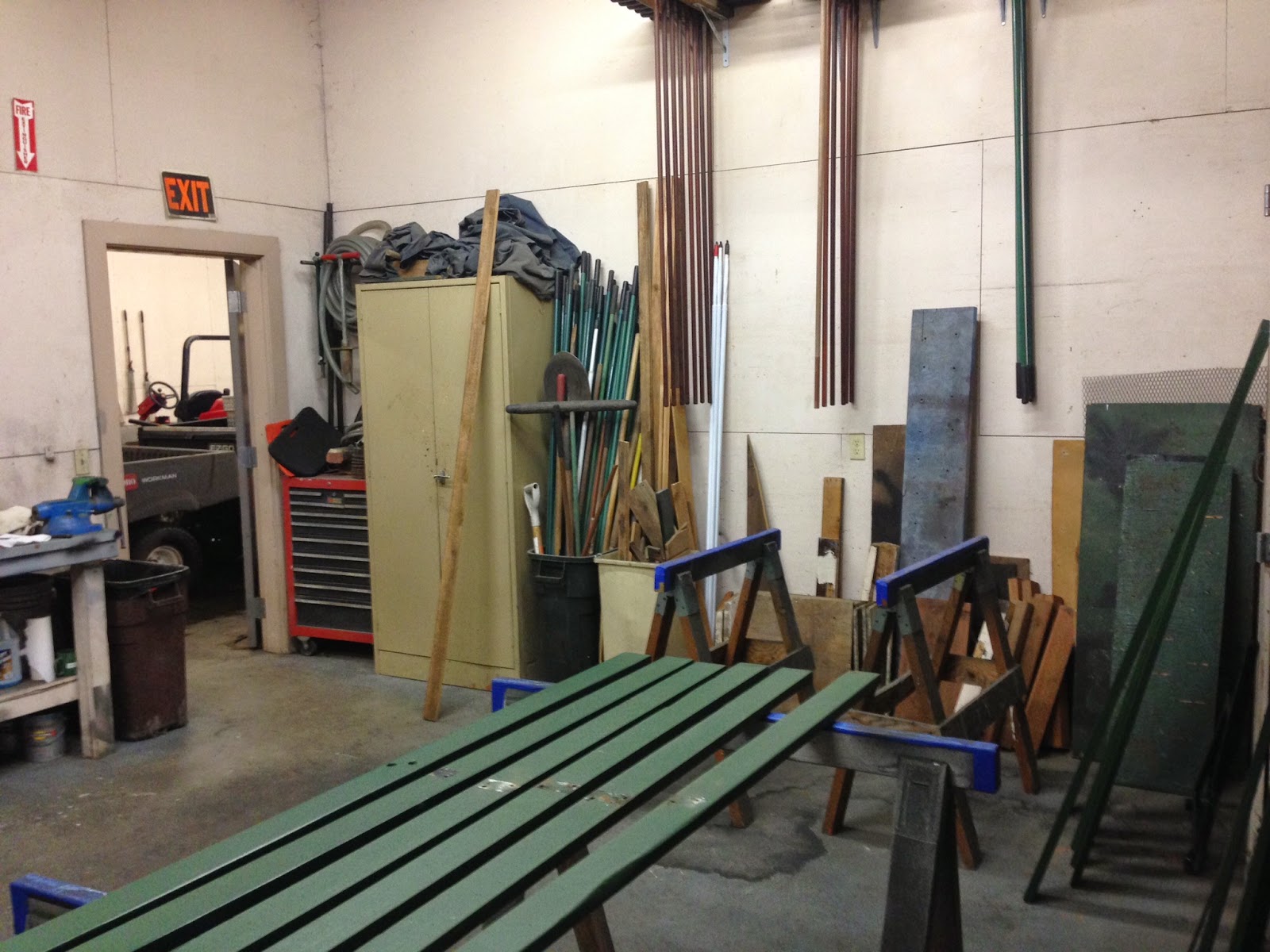 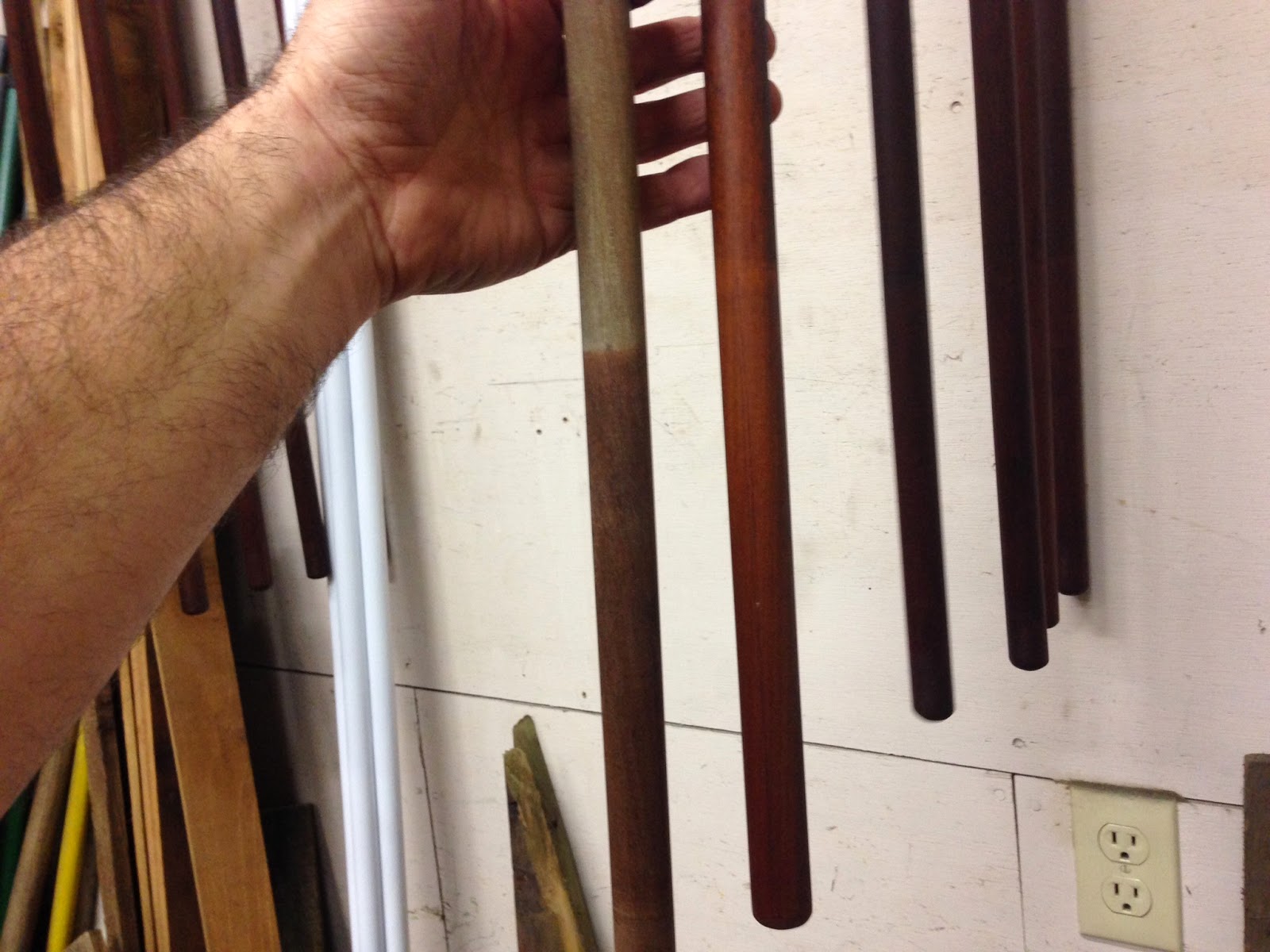 You see here a bunker rake handle that has been re-oiled and one that just came off the course.  The unfinished handle has a dark area at the end.  This is where a rubber grip was covering the handle and prevented it from getting bleached out by the sun.  We will no longer have rubber grips on the bunker rake handles.  They will just be simple and classy like the one on the right.  The rubber grips on the handles were really unnecessary and were just another thing that needed replacing periodically. Our handles are real hardwood so they don't splinter and they look good with just a simple finish. 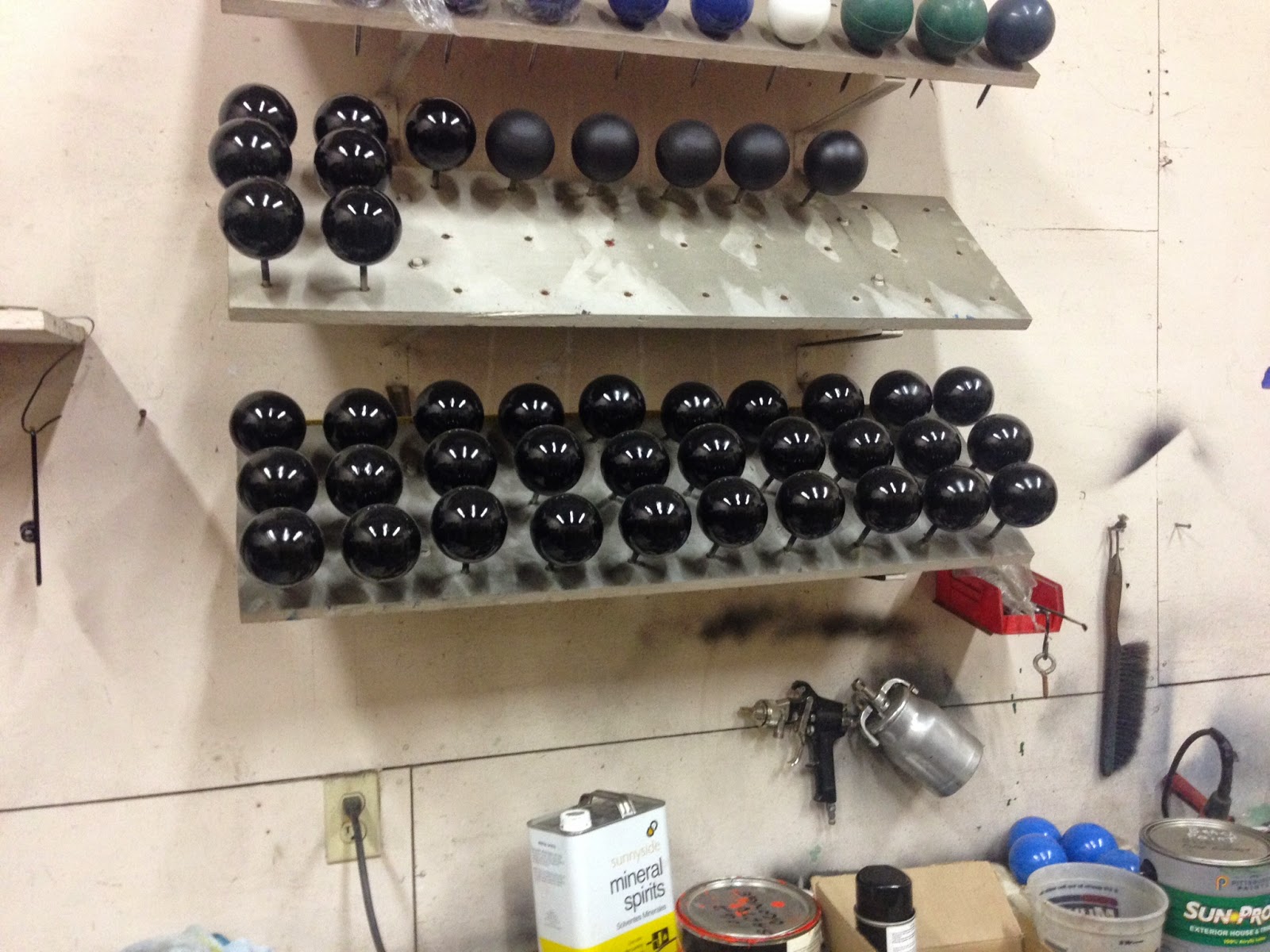 We are almost finished painting the tee markers. 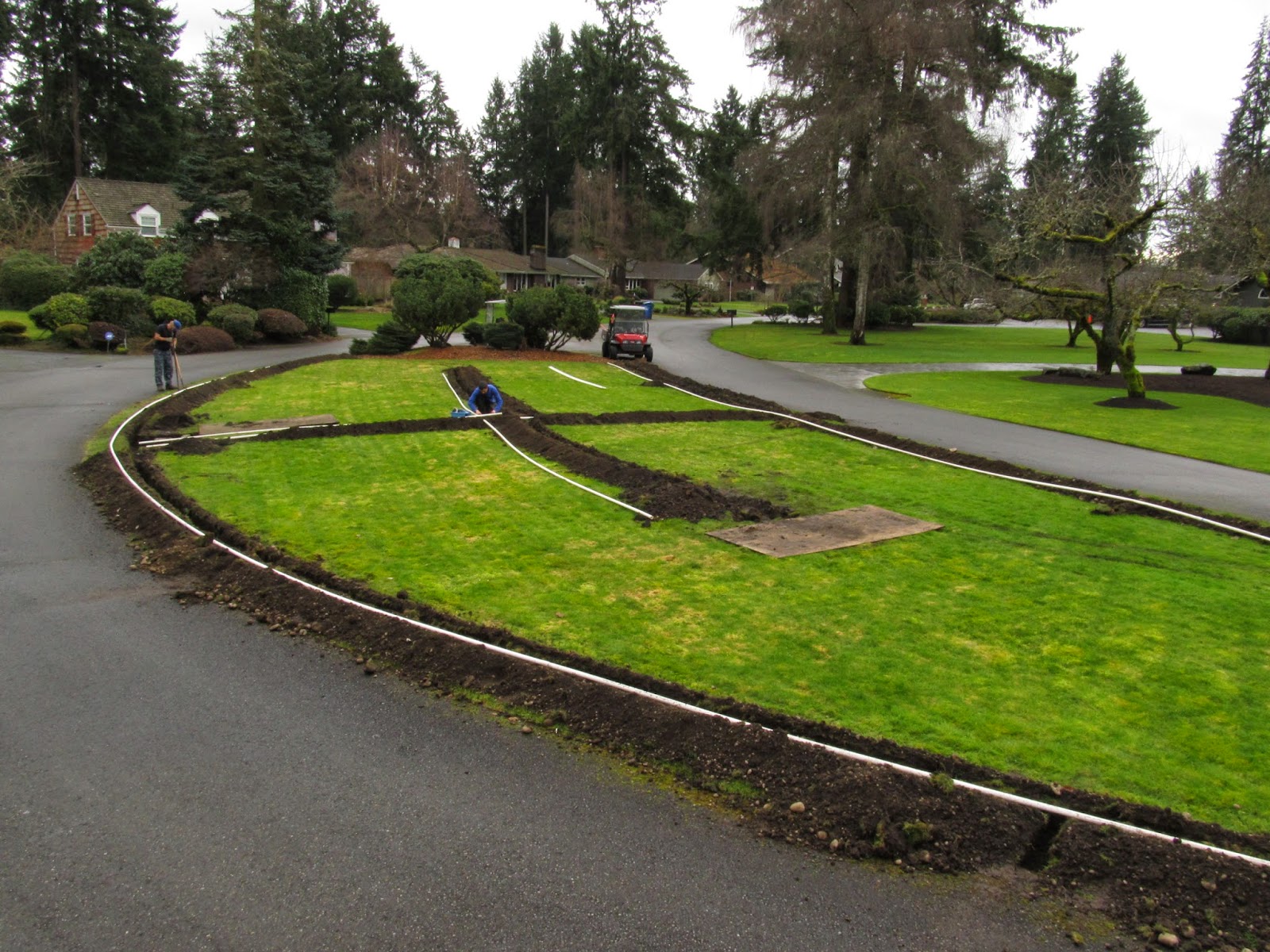 You may not know that we are in charge of the island at Forest Glen Lane.  This week we upgraded the irrigation system in that area.  The old antiquated system had two zones and 5 sprinkler heads.  The new system we just installed has 3 zones and 14 sprinkler heads.   There is no electrical power here but nowadays that doesn't matter as battery operated sprinkler clocks have gotten really amazing in the last decade. This area will be so much better this summer, and we will waste a lot less water since we have better coverage and control. 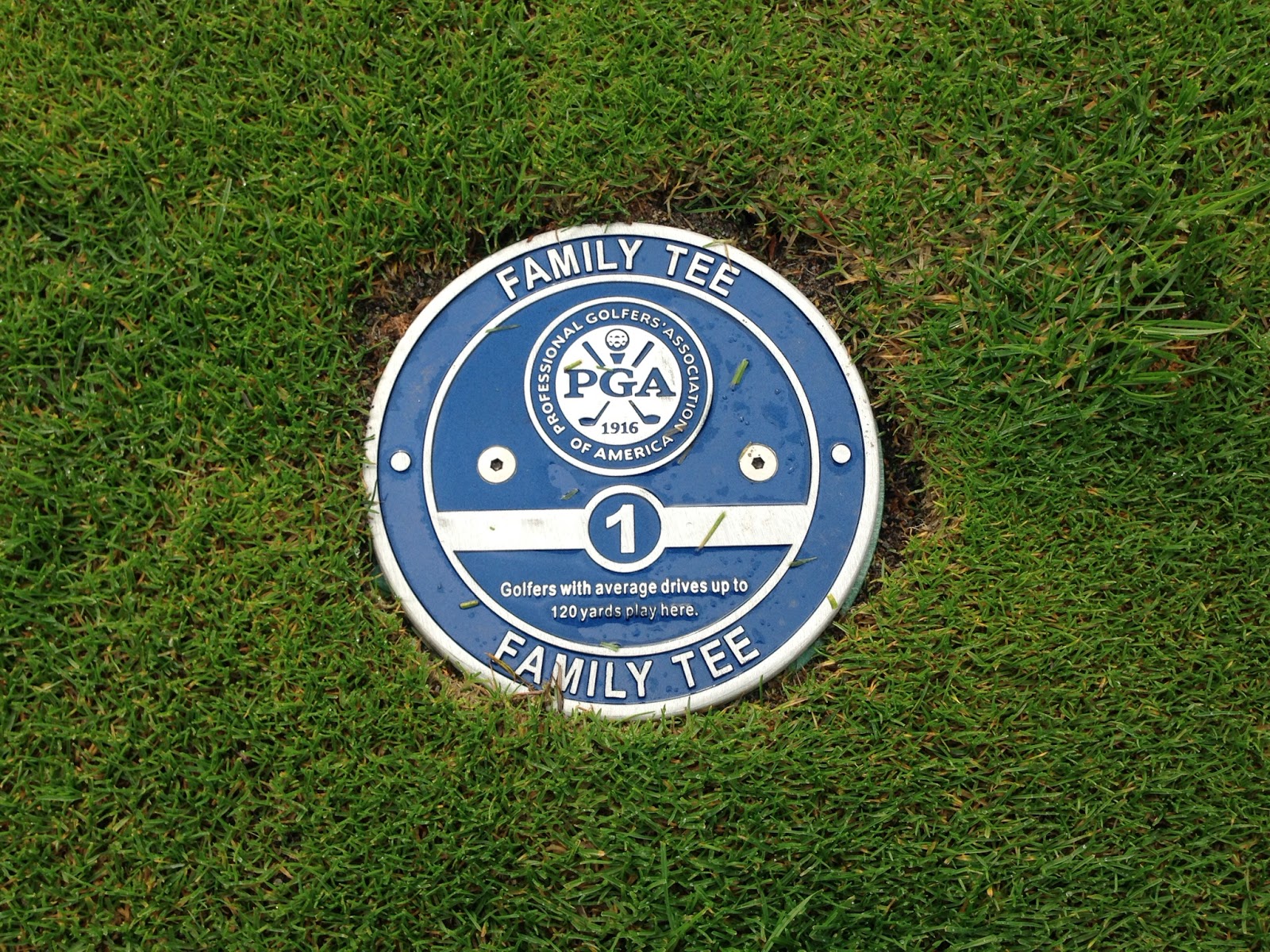 On the course you'll notice some new markers in the fairways.  These markers designate the locations of the new Harbottle short course or family tees.  Basically these tee locations add two short courses for the enjoyment of anyone who wants to play from them.  The family tee concept was created to make the game more fun for those just starting to learn but really anyone can play from them.  John Harbottle III was such a supporter of getting young people involved in golf that we have named the two new routes in his name.  There is a separate score card for the new short courses and you can find that in the pro shop once we have all the markers installed.  They have official ratings so don't forget to post your score. There is a blue level one course that is about 3000 yards, and a gold level two course that is about 4000 yards.  If your looking at these markers and wondering why they are where they are, you might be interested to know that we didn't just put them in random areas.  The markers are also valve box covers. 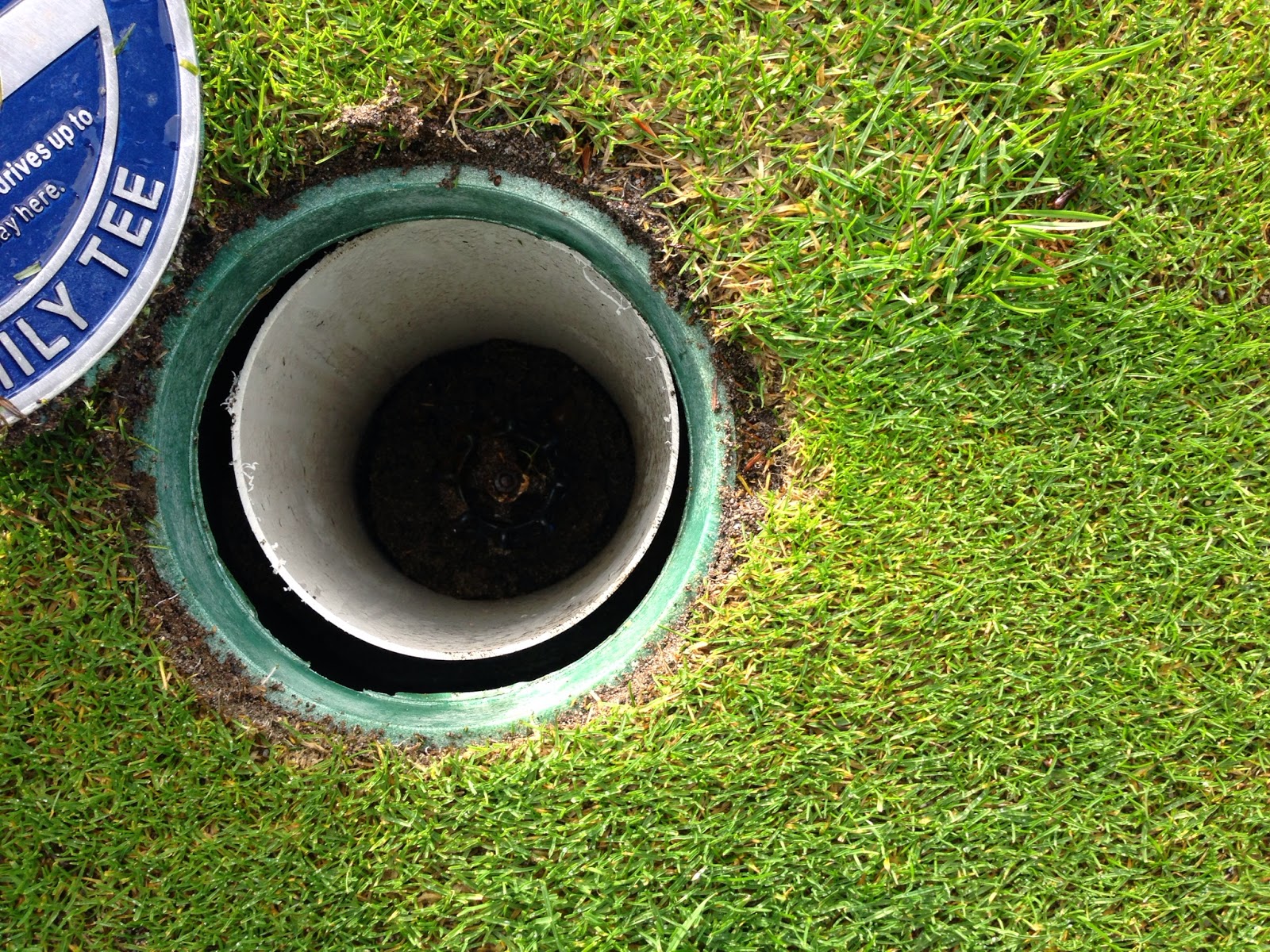 Because our irrigation system runs off a 1953 mainline, we have many valves located right in the middle of the fairway. The 1953 system was a "center row" system; meaning there was simply a row of sprinkler heads down the middle of every fairway.  In fact that system was a "hand" system.  There was only plug-ins for sprinklers and a night waterman would move sprinklers from plug-in to plug-in.   FYI...John Harbottle III was once a night waterman at Tacoma. It's kind of cool to imagine him as a young lad out here in the middle of the night plugging sprinklers into these exact locations.  I've heard that John was very good at this.  It is well known that many a night waterman would spend a great deal of time drinking beer and forget about the sprinklers.  This resulted in over watered soft areas and underwatered dry areas.  That was not John.  Apparently he took the task very seriously and during his tenure as night waterman, the course was exceptionally firm, fast, consistent, and just the right amount of green color.  Would you expect anything less from John?  Anyway I could go on and on but those plug-ins became valves in 1989 and our system today still runs on sprinklers that come off pipe from those valves.  In order to minimize the amount of things in the middle of the fairway that we have to trim around and maintain, we figured whenever possible we would just use one of these valve locations as a place to put the family tee marker.  Everyone should give the Harbottle course a try.  Remember, golf is supposed to be fun and you might be surprised how challenging it is playing a short course when a whole new set of hazards comes in to play.

Posted by Joel Kachmarek at 4:43 PM