Where are the Rings? 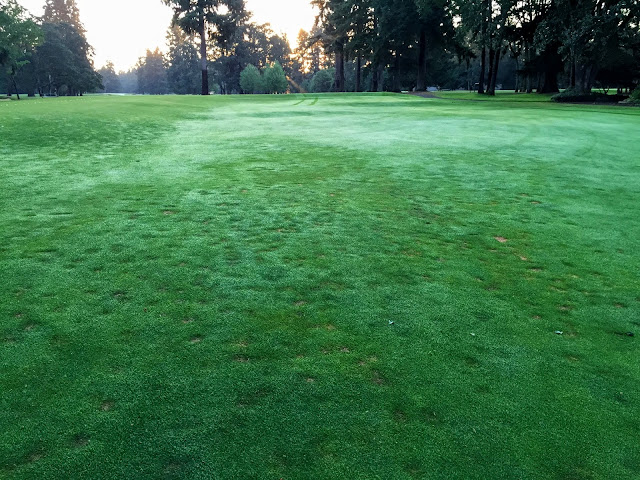 Here's a picture of the 6th fairway taken during the summer of 2015 which clearly shows we were battling some serious fairway diseases. Look at the way the turf is pitted and the dew pattern is very spotty.  The diseased turf was tested that year and the results showed we were suffering from an attack of Fairy RIng and Waitea Patch.  You might remember that we employed some new strategies for the following summer and that suppressed both diseases for a short time but the Fairy Ring did break through.  Here's a picture from last year showing some pretty unsightly turf on the 8th fairway. 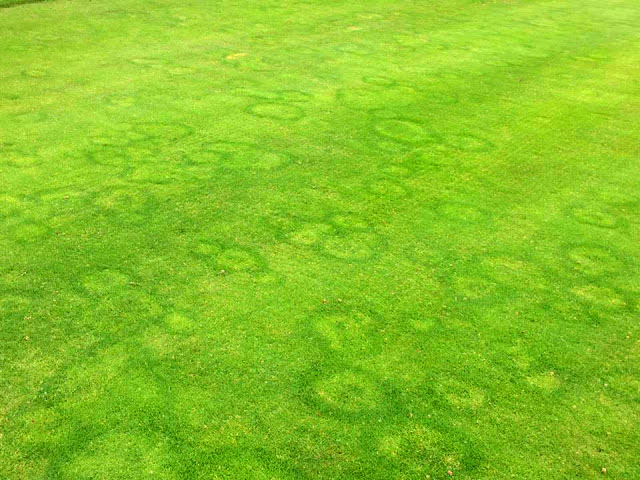 Well I'm happy to report that this year we finally got a handle on this pest.  Here's a picture of the 6th fairway in the same area but taken just the other day early in the morning. 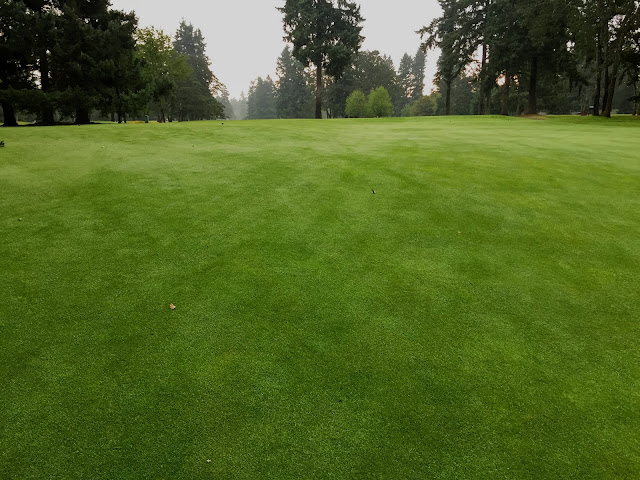 Notice how uniform the dew pattern is.  Also, keep in mind we just went through the driest summer stretch of weather in history.  We had 55 days without rainfall and above average temperatures.  Those conditions favor the development of Fairy Ring but yet we aren't seeing any.  So what did we do?  Well we took no chances this year.  We did everything we could think of to increase our chances of suppressing the disease.  First of all we core aerated last fall and pulverized the cores so as to return the sandy soil back into the turf canopy.  Essentially that is tilling the soil which redistributes the diseased soil and aids in a natural type of disease suppression. Secondly we made preventative applications of plant protectants in the spring and timed those applications perfectly with the rising soil temperatures.  Lastly we were much more diligent with the injection of wetting agents into the irrigation water.  Essentially we were applying wetting agents every day just by irrigating.  Here's a couple more pictures taken early in the morning showing the uniform dew throughout the fine turf areas. 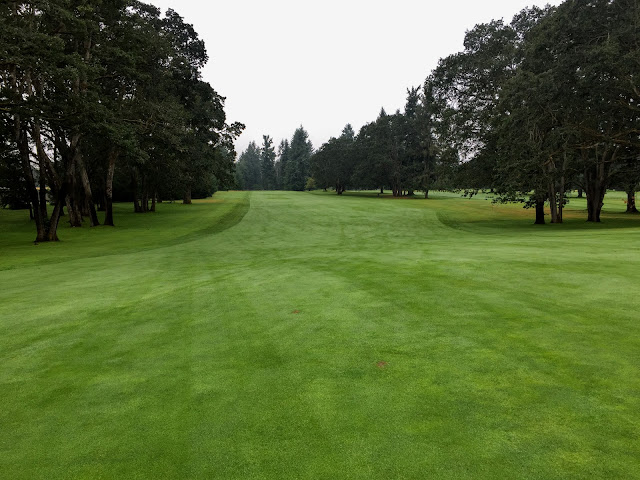 I can't say enough how excited I am about the successful suppression of this pesky disease. I really look forward to next year as I think the fine turf will be even better as we will have overseeded with chewings fescue a couple times before then.  Many of you have expressed that the fairways are the best they've been in ages and I would have to agree but there is still much room for improvement.

On a side note, are some of you wondering what these dead spots are on 13 and 14? 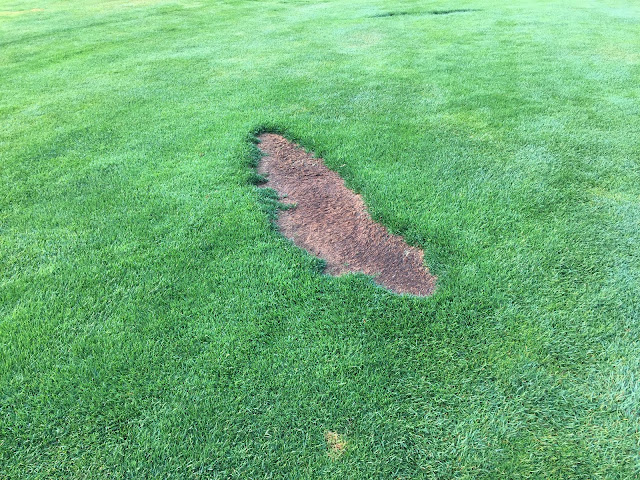 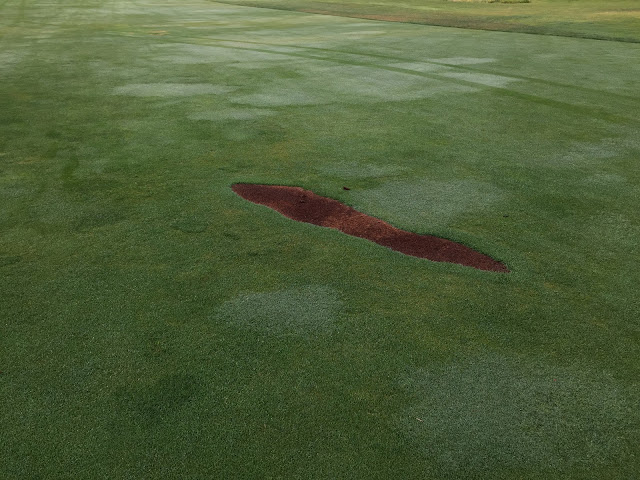 Well lets just say this is one of those things that just happens and is almost completely unavoidable.  What happened is we were spraying fertilizer on the fairways and the center spray boom malfunctioned and wouldn't shut off.  The center spray boom is not visible by the operator so unfortunately the problem was not noticed until some turf had been overdosed.  It goes to show that fertilizer can make things pretty, and green but it also can be a good herbicide in higher doses.  And, what about this dead spot on the putting green??? 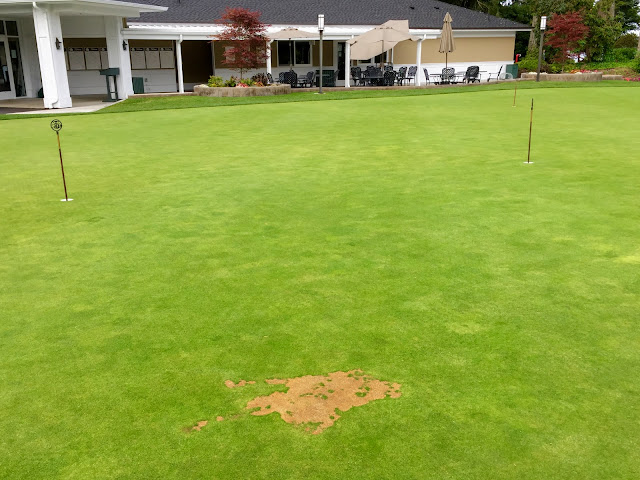 This dead spot could have been avoided.  It was caused by a spilled drink during one of our recent events. We understand accidents happen but the Committee is exploring the idea of serving all adult beverages in the future using one of these very classy spill proof containers. 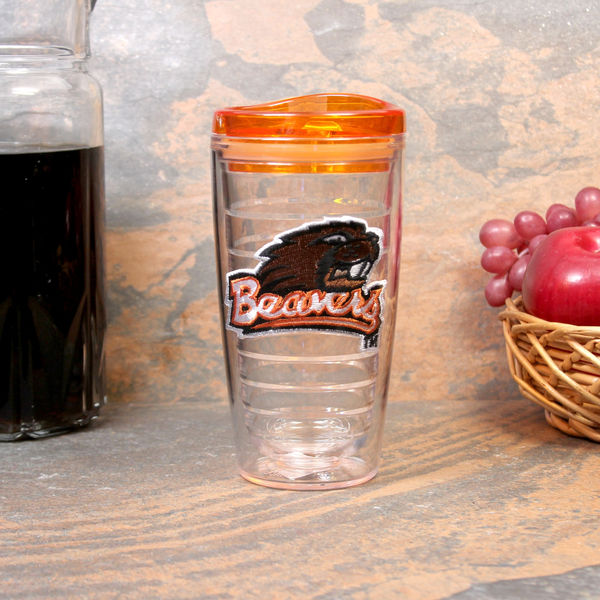 Posted by Joel Kachmarek at 2:51 PM