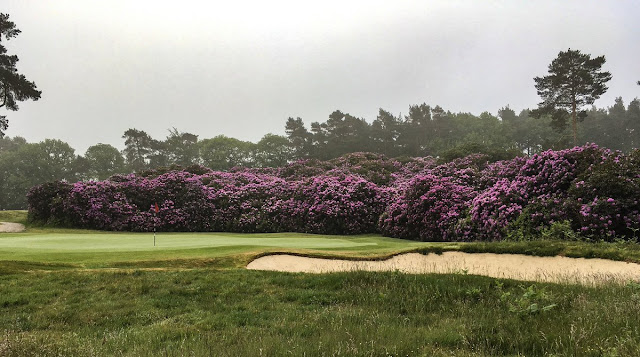 This is a picture of one of the greens at Swinley Forest Golf Club in England. The backdrop for this green is a huge thicket of Rhododendron.  This backdrop is not only attractive, it's also the most perfect vegetative buffer. It's perfect because it's dense, evergreen, and just the right height.  It's tall enough to hide or screen something in the background that you don't want to see, and not so tall that it will ever cause serious shade problems on the putting surface.  All too often vegetative buffers are designed using trees which ultimately grow to a height which cause serious shade problems. Such is the case at Tacoma where in the past the Douglas fir tree was planted extensively to screen the perimeter of the property.  The Douglas fir is an invasive native tree which grows rapidly and when it's planted in the wrong place it quickly can cause serious shade problems.  The trees planted between the freeway and the Club's boundary are starting to become a real problem in regard to shade.  The Club's Tree Management Plan is addressing this serious issue.  I thought I'd share some of what we've done so far. 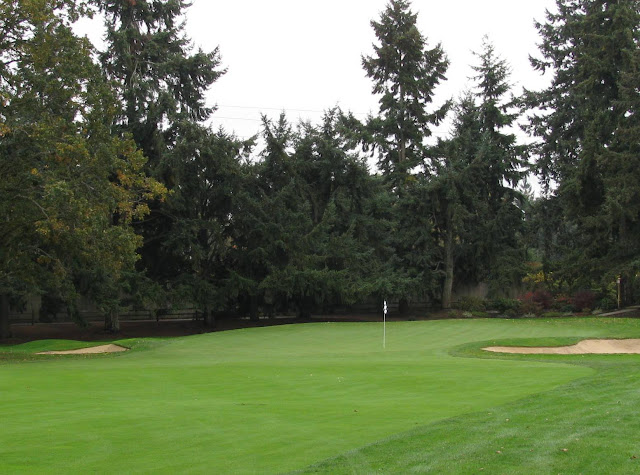 This picture of 12 goes back to 2009.  In 2010, a sewer pipeline was installed along the east property line and that project involved removing hundreds of trees including those behind the 12th green.  This was great for improving growing conditions on the 12th green but it really exposed the view of the freeway and the fence-line.  Here's what it looked like after the trees were removed. 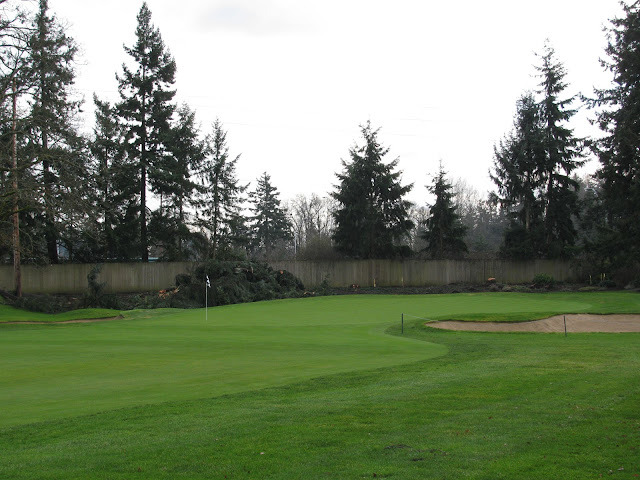 You can imagine at the time there was a huge desire to quickly replant something to buffer the new unsightly backdrop.  We had to come up with a planting plan and in fact this exercise back in 2010 was the catalyst for creating the Club's Tree Management Plan.  You see at the time the Club didn't have a plan to deal with the growing problem of shade which was inevitably going to cause serious damage to the golf course playing surfaces.  When the sewer project came about, it was clear that we needed a plan, not only to restore the grounds impacted by the project, but to deal with the rapidly growing trees throughout the property.  We made some mistakes when we replanted after the sewer project, but we also got some things right.  Here's what 12 looks like today.  Good buffering of the fence-line with evergreen shrubs that will never cause a shade problem for the putting surface. 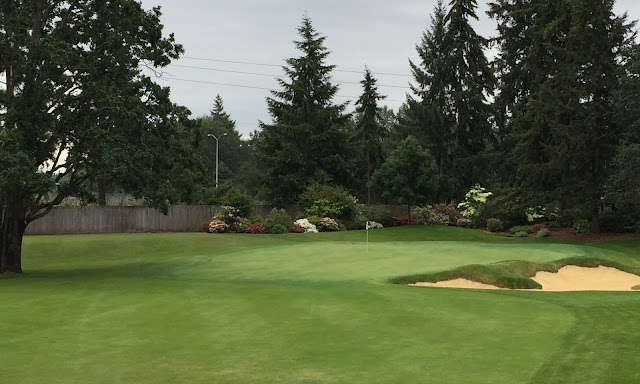 Next case in point look at the work we did on #3 tee.  This was the first project following the approval of the current Tree Management Plan which clearly defines the Club's strategy in regard to buffer plantings.  Here's what it looked like before tree removal.  The goal here was to improve growing conditions for the teeing grounds and then buffering the view of the maintenance facility. 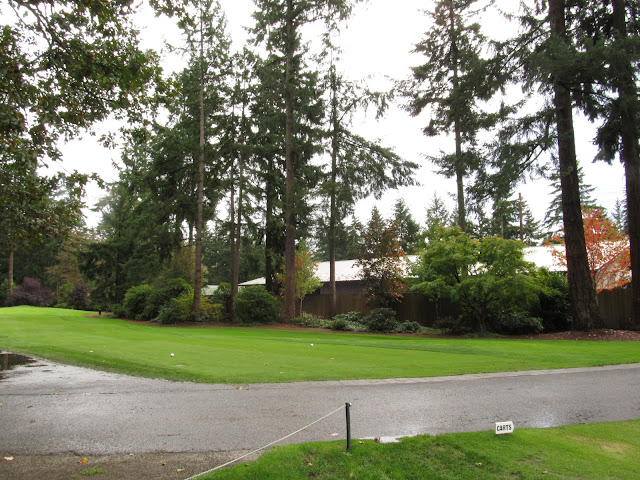 Below is what this area looks like today.  Great buffering of the maintenance facility and lots of sunlight for the turf.  In fact the growing conditions are so good here that soon we will be removing this cart path as we've done with great success in other areas.  I should note that yes we are using trees in the new buffers, but we're only using species which when mature do not achieve a height that would cause a shade problem in the future. 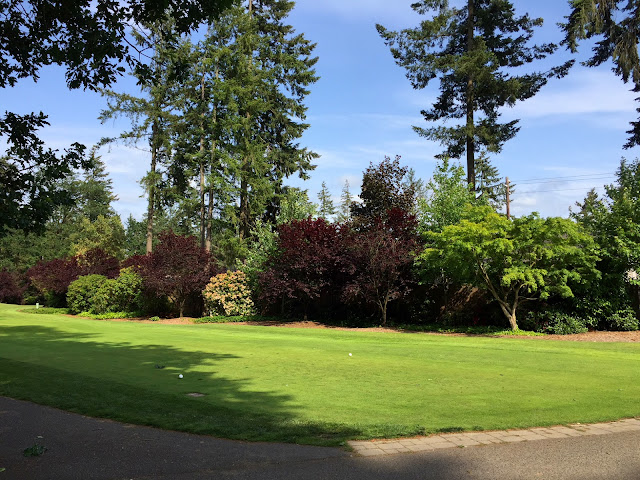 Next case in point and in that same general area, check out this project we completed around #2 green.  Here's a look at the site before tree removal and buffer planting.  The project goal was to improve growing conditions for the putting green, and plant a buffer to screen the view of traffic on the road in the background. 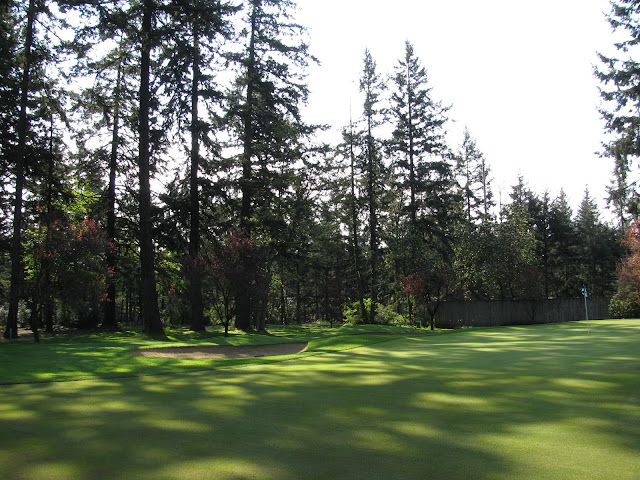 There has been several tree removal projects for this particular putting surface and in this phase, 5 large firs were removed to capture a greater amount of morning light.  Here's what it looks like today.  Great buffering of the background and now the sward we have on this putting green is as good as any on the rest of the playing field. 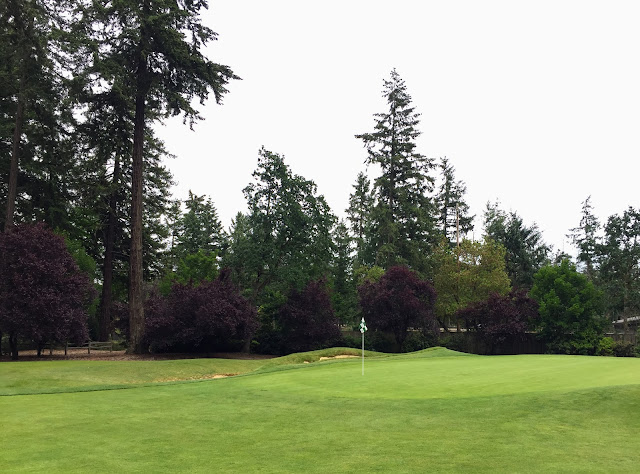 Lastly, let's look at a very recent project near the south end of the property.  This is the 14th green before we performed any tree removal.  The goal with this project was to improve growing conditions on the putting surface and establish a buffer to screen the view of cars on Thorne Lane. 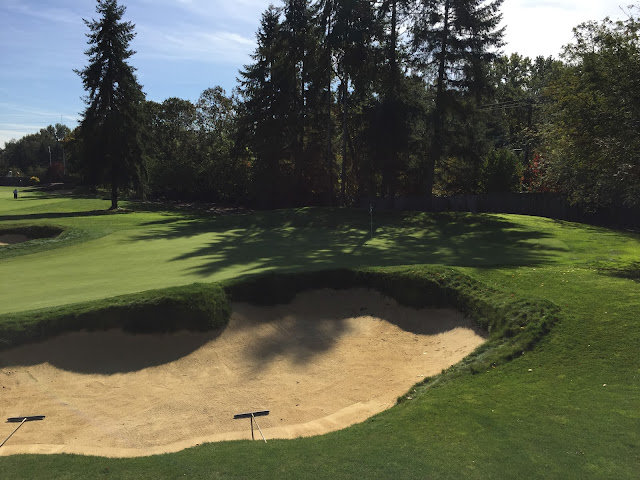 Here's the same view today.  Check out the obvious increase in sunlight, and the buffer planting is very effective which is cool considering it was just planted.  I can't wait to take this same picture in 5 years. 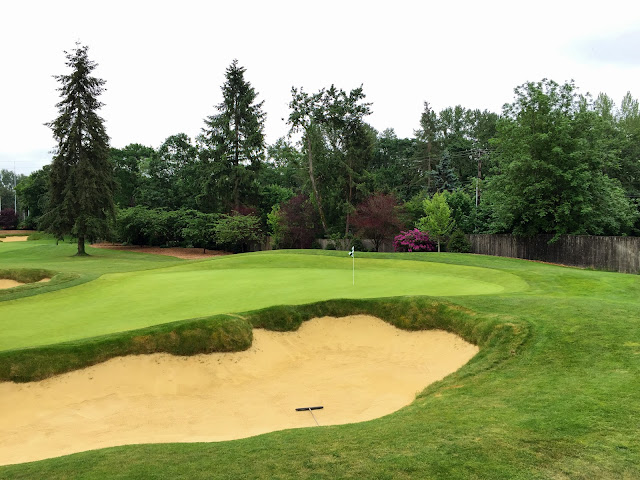 So this is pretty exciting stuff in my opinion.  The Tree Management Plan is not just about preserving the oak savanna or tree removal for improved growing conditions.  It specifically addresses the serious issue of the Club's perimeter where there is a need for an effective, sustainable privacy screen.  So you might be curious which area we're going to be working on next.  Click HERE for the Tree Management Strategic Plan which is a summary of the plan's upcoming projects.