In 2007, we installed this beautiful 80 foot aluminum flagpole. 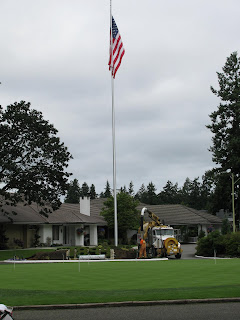 She replaced the 80 foot wood flagpole which has stood in front of the Club since "I don't know when".  I've done a lot of research but I simply cannot find any information in the history books that will give me a clue when the wood pole was installed. Anyway, with the major improvements that were made to the parking lot in 2007, the wood pole had to be relocated and it was decided to replace it instead with an aluminum pole that will last forever.  Below you see me with the chainsaw cutting down the old wood pole. 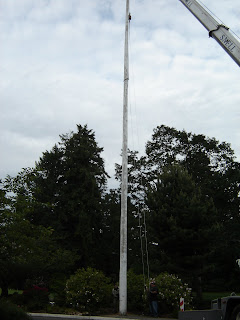 Point of interest, I saved the old wood pole and now she stands in front of our maintenance facility.  The picture below shows the Green Department flag flying from the old pole at our shop. 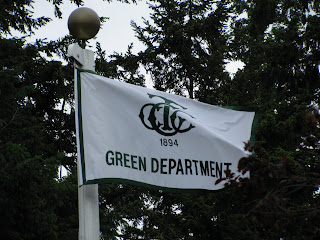 Back to the new poles we installed this week.  I thought that the installation was interesting enough to share since it's a little more complicated than just digging a hole and putting it up.  The following pictures tell the story.  First, after much discussion deciding on the exact location, the holes had to be dug.  This was done with a vaccuum truck as seen below which is the same type of machine they use to clean out the drains on all of our streets. 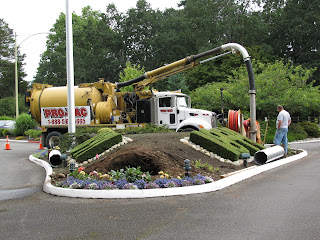 They shoot water at high pressure into the soil which loosens it and then the loose, wet soil is sucked up into the truck, as seen here. 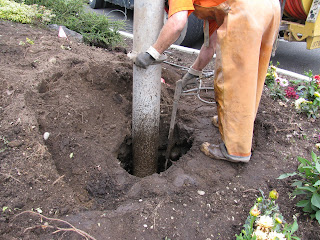 This method has several advantages over digging with a backhoe.  First of all, the depth of the holes were 7 feet for the 70 foot pole, and 6 feet for the 60 foot pole.  Digging holes this deep with a backhoe would have resulted in a hole that is much too wide for the confined space of the 1894 island. We would have ended up having to replace curbing, and removing all the shrubs and flowers. Also, the displaced soil would have been loaded into a dumptruck and inevitably dirt would have been spilled on the road meaning more clean up afterward.  The biggest advantage to the vaccum truck is that there was utilities in the area that had to be avoided.  Using water and the vaccum meant that there was virtually no way of damaging any of the utilities.  The picture below shows that indeed we did find the high pressure water main which supplies all of the homes south of the club along Country Club Drive.  This is a very old concrete/asbestos pipeline and breaking it would have been a very costly mistake. 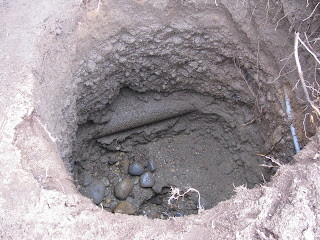 So after the hole was dug, a sleeve was dropped in along with several yards of concrete. 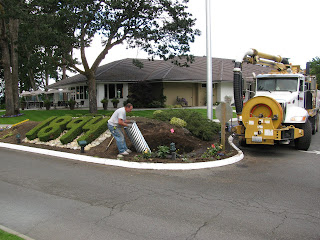 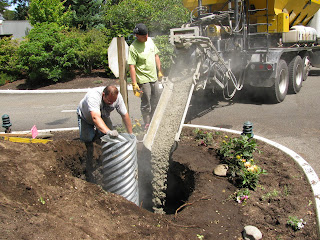 Here you see the sleeve has been installed and there was hardly any disturbance to the flowers and shrubs. 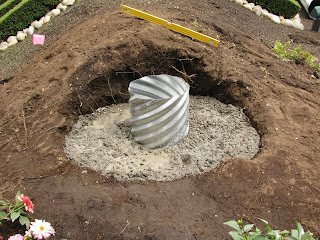 Jeremy repaired the landscape and then we were ready to bring in the flagpoles. 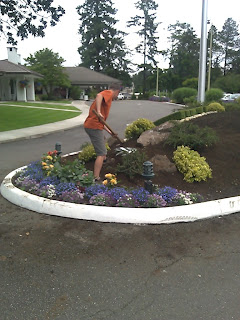 Each pole arrived on site in three very large pieces and then was assembled. 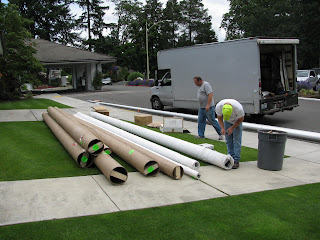 The crane came in and stood them up while the pole was guided into the sleeve. 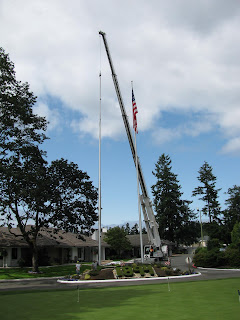 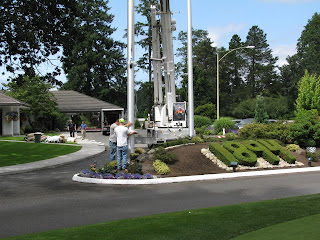 The pole is held straight and then sand is poured in around the pole.  The sand keeps the pole straight but also allows the pole to sway a little in high wind conditions.  Concrete would hold the pole to rigid which isn't good (I guess).  Mortar was placed on top of the sand to keep everything in place and that's pretty much it. 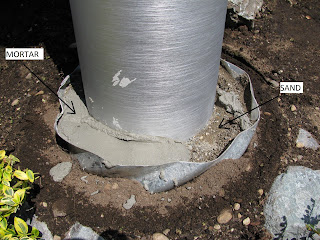 There you have it.  An impressive display.  Now we are flying the State flag and Club Flag along with "Old Glory". 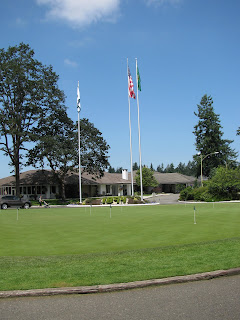 Posted by Joel Kachmarek at 4:26 PM