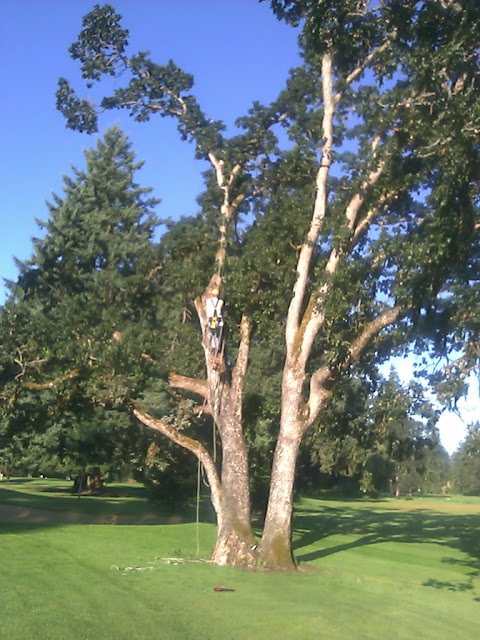 Today we're taking some more limbs off the old oak on #5.  The objective is too lighten the load on the two leaders in order to prevent certain failure of the tree.  I mean certain because ever since the storm of 2006, we basically have been just waiting for this tree to fall as it has significant disease issues.  In fact the Green Committee has discussed several times what we're going to do when we do loose this tree.  We've talked about adding a bunker in its place in order to have some sort of penalty for missing the fairway, but certainly the hole will never be the same without this tree.    Mother nature can be cruel to golf course architecture and I can't think of a hole at Tacoma C&GC that has changed more due to her hand, than the 5th.  In the great storm of 1997, we lost two oaks near this one we're working on today, and the fir that guards the green lost almost all of its limbs.  Yet the hole remained a great challenging short par 4 because of this oak tree I'm discussing here.  Below is a picture I took of this tree as we were preparing for the 2007 U.S. Girls Junior.  I took this picture because there was great discussion over pruning some of the limbs as requested by the U.S.G.A. 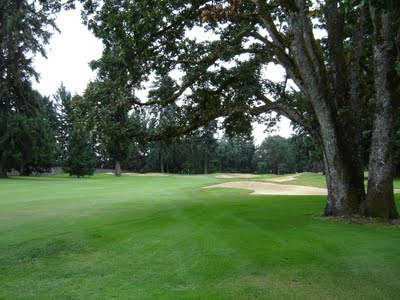 Turns out we were just wasting a bunch of time talking about this tree because 3 months later, the storm of 2006 took out the entire leader that leaned toward the fairway.  Check out the picture below I took on 12-15-2006. 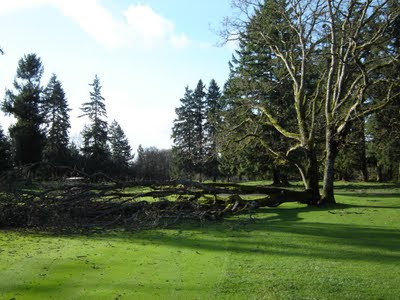 Back then we would have just removed the entire tree if it was almost any other oak tree on the property, but this tree is instrumental to the hole and it protects people on the 9th tee from errant drives off the 5th tee. So it was decided to prune the remaining two leaders to lighten the canopy and install a cable to keep the remaining two leaders for as long as possible.  The Committee agreed that the loss of this tree was inevitable so 3 trees were planted beyond the bunker in the hope that when we do loose this oak, those new trees would be large enough to protect the 9th tee.  So here we are today and I've decided to be more proactive about saving this old girl by installing a post.  I've never even considered installing a post on a tree mainly because in the past for some reason I thought it would look strange.  I guess today I don't think it will look strange.  Most certainly in the short term it might look odd since it will be a change from what we've seen all these years.  But I imagine after a very short period of time we will not even notice the posts since that will be the new normal.  We'll just have to see.  Right now we are having the posts built and we will be installing them shortly.
Posted by Joel Kachmarek at 10:59 AM