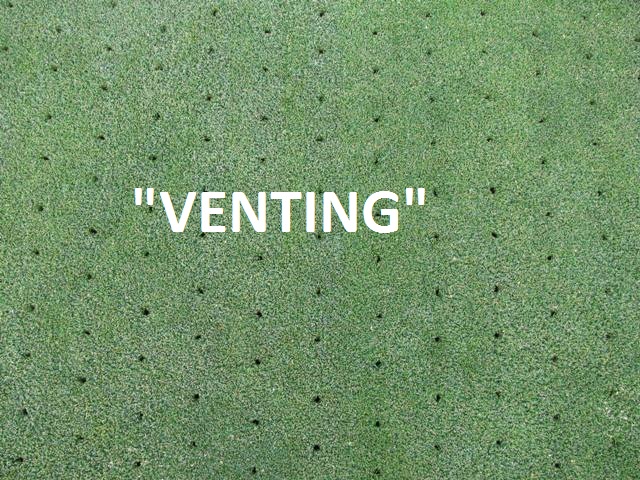 If you've been a member here for a while then you might have noticed that recently there has been a dramatic increase in frequency of aeration to the putting greens.  Specifically there is more and more times that you may see the little holes in the greens.  Our regular core aeration followed by the heavy sanding is still just twice a year.  The process which creates the little holes we like to call "venting", and yes we are doing this almost monthly year around which has not been the norm for the last several years.  So why are we "venting" so frequently?  It's not because of some recent realization that aerification is good for putting greens.  We have always known that poking holes is good for turf.  We have also always known that golfers hate it, and for good reason, putting quality suffers after aeration.  This is simply not true anymore.  The "venting" process with our new equipment is literally non disruptive.  I would even argue that putting quality increases after we vent the greens.  Although you can see the small holes after we "vent", the process of "venting" lifts up the soil and creates pore spaces.  Rolling the green after punching the small holes then pushes everything back together resulting in a truer surface.  This is the best of both worlds, now we can "vent" the greens, give them a breath of fresh air, and still not interfere with putting quality.  So now are we "venting" more often to true the putting surface, not really, we are "venting" more often simply because we can.  We recently purchased a second machine like the one you see Doug operating below. 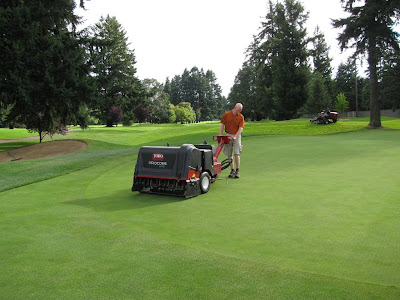 This machine is a TORO Procore 648.  It is a highly versatile aeration machine, capable of punching all sorts of different kinds of holes, and it does it quickly.  The picture below shows it in action, and as you can see, the stroke arms punch quicker than the camera shutter. 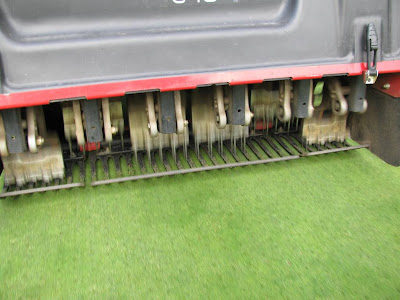 Now that we have two of these machines, we can accomplish the "venting" process ahead of play on almost any given day.  With this advantage, we simply punch the little holes as frequently as we can.  Why?................Because we can, and because we should.  Our soil tests have shown that since we started this frequent "venting" process almost a year ago, our infiltration rate has doubled and our soil porosity has increased almost 2%.  This is significant.  Our greens are draining quicker and the increase in porosity means the soil has an increased abilitiy to exchange gasses.  Specifically, oxygen can readily move into the soil and carbon dioxide can move out.  Without oxygen, the soil microbe population cannot thrive.   Why do we want soil microbes?  Because without them we would have serious turf problems.  Soil microbes consume and break down the organic material in soil utilizing the minerals and nutrients to support their own life.  As they die, and they die often since they have a very short lifespan, the nutrients and minerals that they consumed become available to the root system of the turf.  It is a necessary cycle that cannot be maintained without oxygen.  That is why we "vent" and that is why our greens are better than ever.
Posted by Joel Kachmarek at 1:20 PM