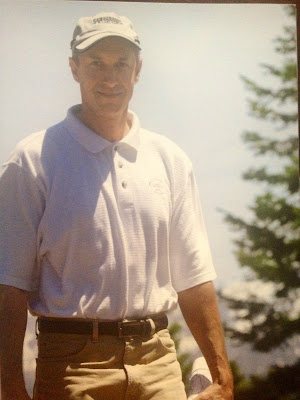 Yesterday we officially said goodbye to John during a beautiful service at St. Charles Borromeo followed by a reception at the Club.  For me, yesterday can be summed up in one word....."hard".  It was hard to hear Scott Alexander's eulogy.  It was hard to see the Harbottle family, and for me it was the first time I'd seen them since John's passing.  It was hard not to cry.........so I did.........often.  It was hard to say goodbye to John so you know what???................... I'm not going to.  Actually it will be quite some time before I can say goodbye to John Harbottle III.  John and I have unfinished business.  We have to complete the current Master Plan.  That will take time and throughout the process I will be trying to get in his head and carry things out the way he would have wanted.  I will be thinking about John and trying to think like John for some time.

But let me tell you yesterday was hard for me and a lot of people.  And I mean a lot of people.  It was one of those days when you realize that there are just some very special people in this world.  Like John, there are those people that just connect with others wherever they go.  It was one of those days when you say to yourself, "There is no way this many people will come to my funeral".  So in a way, it was one of those life changing moments where you look hard at yourself and ask "am I doing all right"?  And I mean that like "am I doing things right"?  You see, there was over a thousand people at John's funeral, and they weren't there because he was some great golf course architect.  Fact is...... John was a great golf course architect, but everyone came to say goodbye to John because he was a great person.  Because his job took him all over the world, he met countless individuals.  So he had the rare opportunity to connect with so many more than most of us, and it's obvious that he had the gift to connect better than any of us. So if you want to have a thousand people at your funeral, a good start would be to start being like John.  Work hard.  Love your Lord.  Love your family. Treat people the way you would like to be treated.  That's what John did and people took notice.  People respected him. Yesterday, that was so obvious.  If you were lucky enough to be there, you saw one of those life changing moments.  You wished it was yourself  that passed and not John.  You wished you could be more like John.  Mostly, you just wished John was not gone.  Many of you want to have some closure and are saying goodbye.  Many of you can.  I am not ready.  I am going to think of him, and try to think like him and finish this master plan.  In addition, I am going to try and be more like him because he was just that kind of man that a man aspires to be like......... I tell'ya I'm really going to miss him. 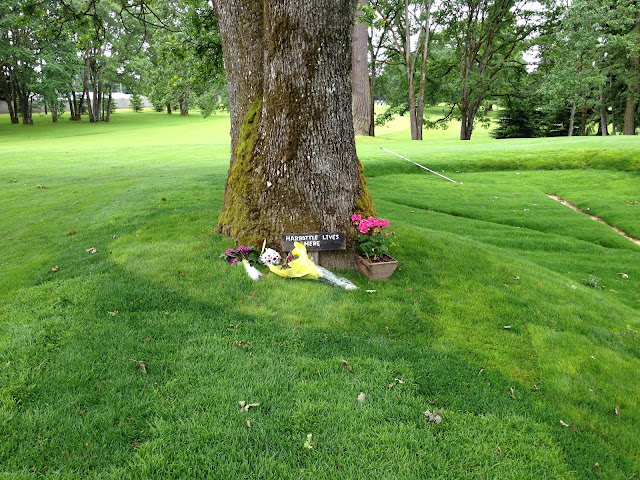 A memorial has started on the 6th hole.  Please feel free at any time to drive down the maintenance road and  visit it. Following are some pictures from yesterday.  First, the endless row of cars  that flowed into the Club and spilled into the practice hole.  The amount of people that packed the clubhouse I'm certain exceeded the  legal capacity.  The many displays depicting his work and his life.  It was a great tribute to him. 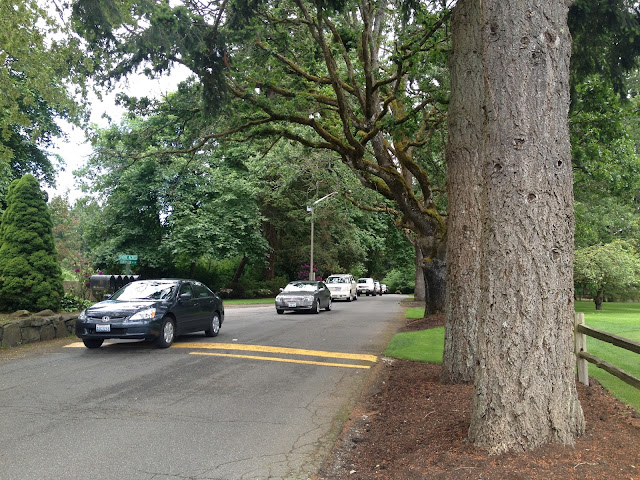 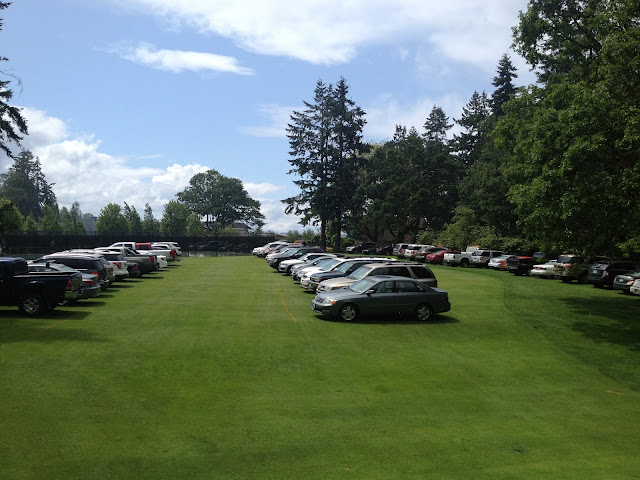 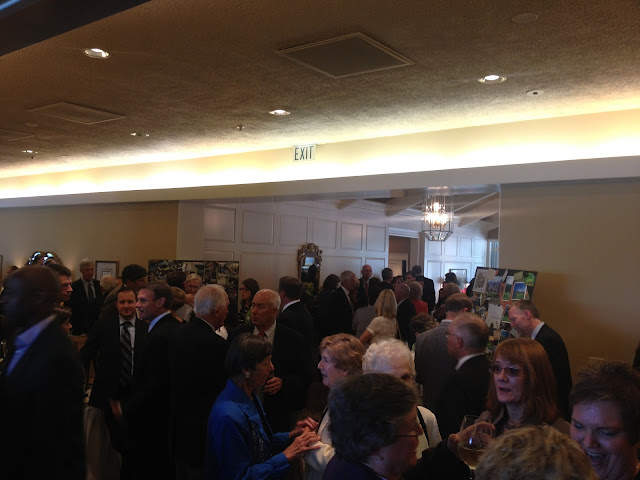 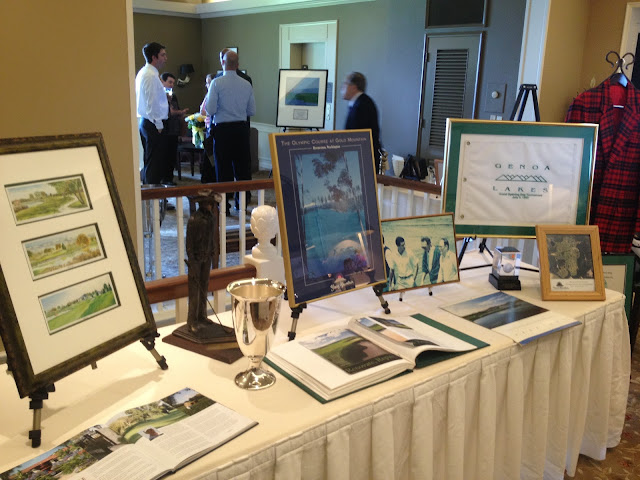 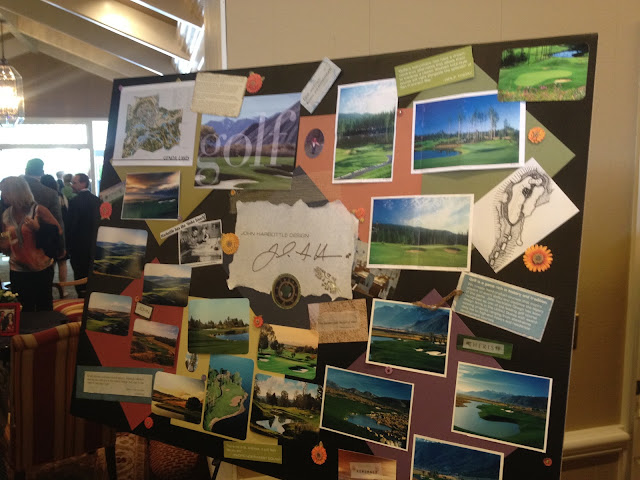 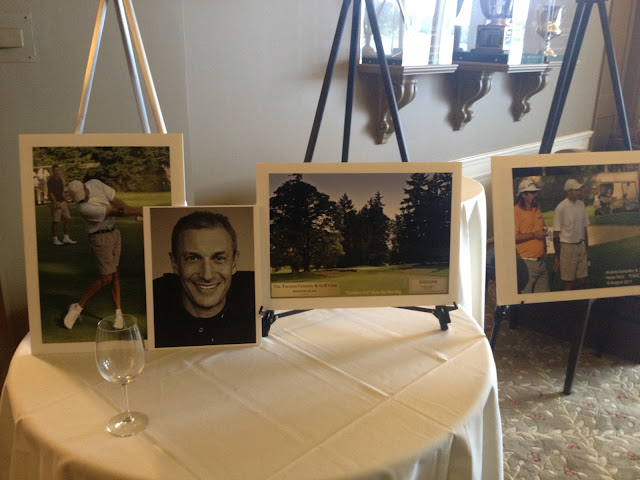 I love this picture below.  It is of  the 6th hole with John's new bunkers which actually today are not yet complete.  One of our members has the software to make them look finished by adding the sand digitally.  Don't they look beautiful. 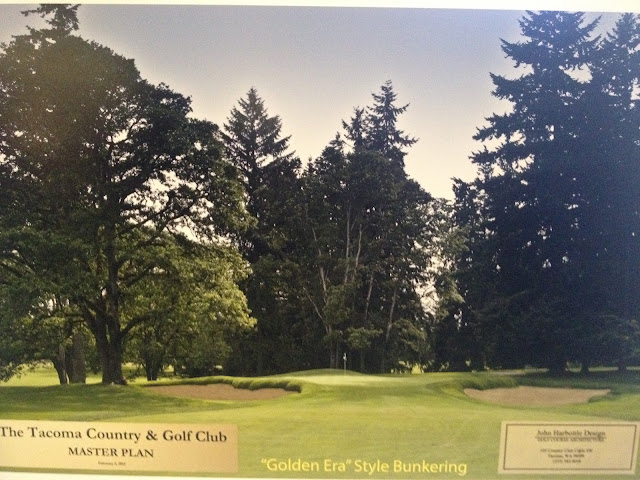 June 14th is the day we install the sand into the new bunkers and I'm sure John will be proud of them since I know he'll be watching and making sure I have the right depth from edge to center.  Soon we will see the finished product that is John's vision.  There is no doubt we will love it.
Below is the front and back of the funeral service bulletin. 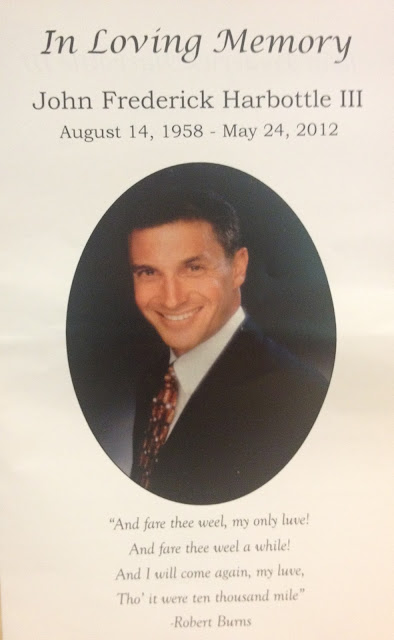 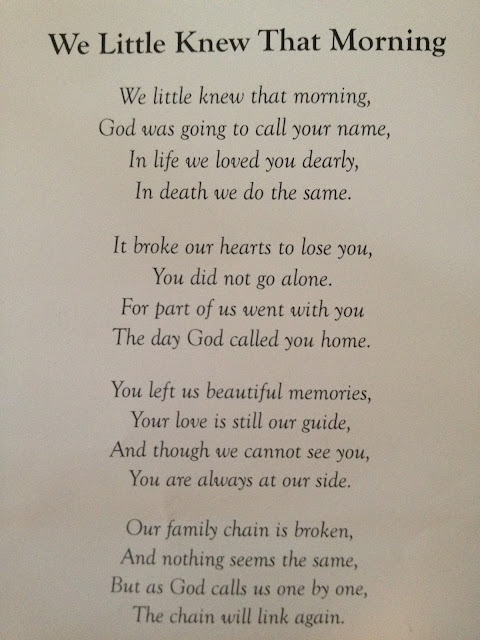