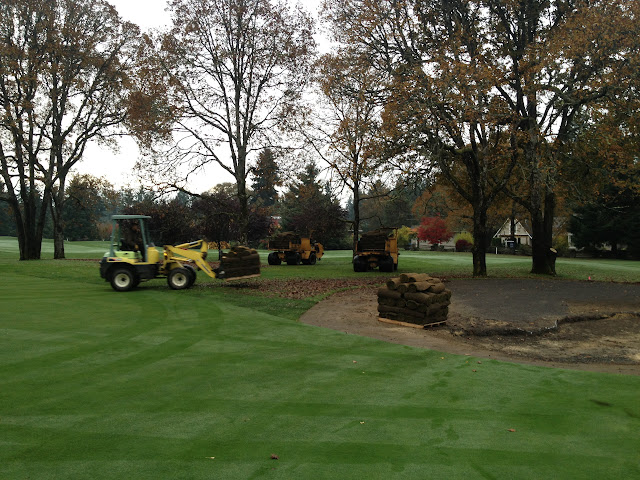 The first load of sod came in today.  We got 9,000 sq. ft. of ryegrass and 2,000 sq. ft. of the scottish fescue blend.  Here you can see our shaper Kip Kalbrenner distributing several pallets of sod to each bunker site. 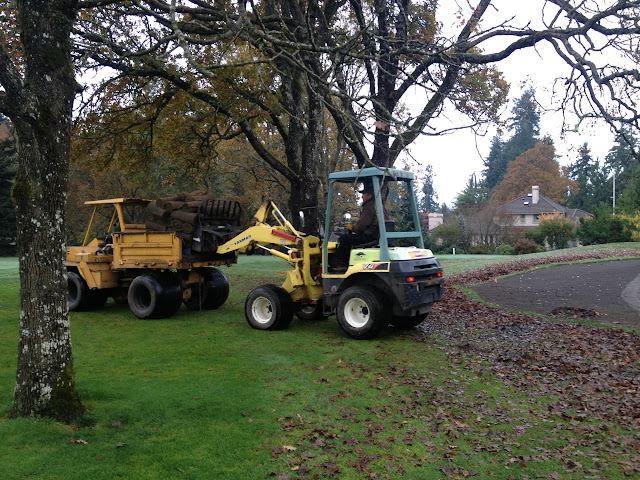 He takes one pallet out on the fork lift and then one in each dumptruck.  This way he is able to distribute an entire semi load of sod in just a few minutes. 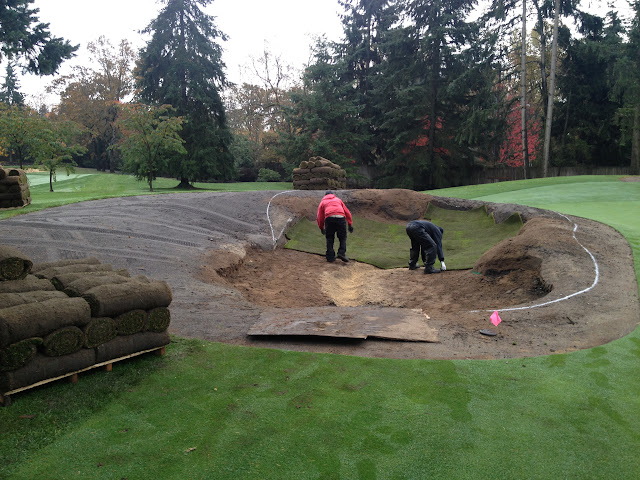 The guys wasted no time laying the ryegrass in the bunker floor.  You can see the white line on this bunker which defines where the fescue will go. 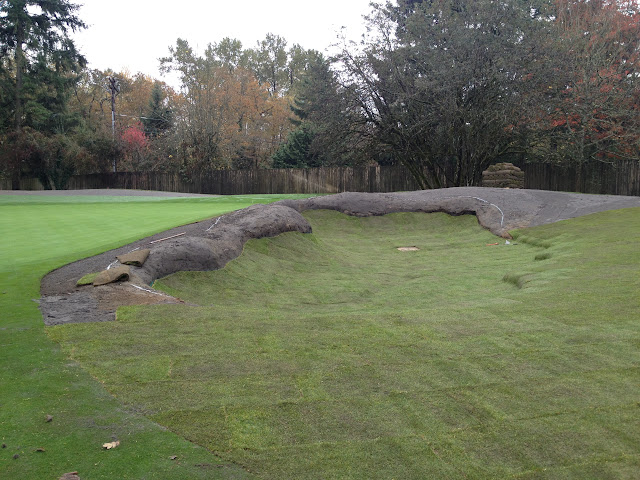 Here is 2,000 square feet of ryegrass laid out on the bunker to the right of the 14th green. 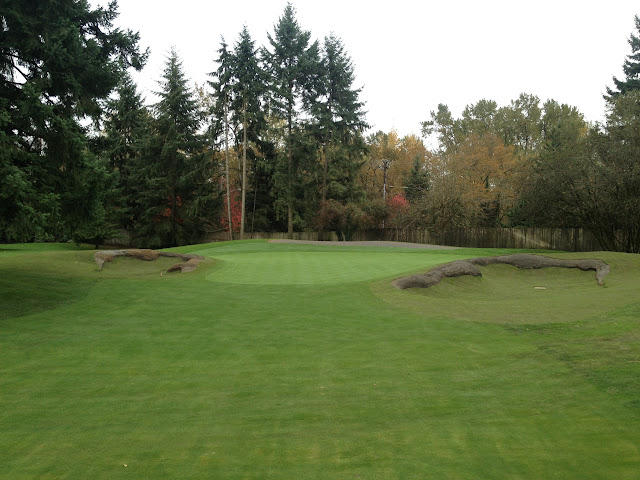 Here is what it looked like at about 2 o'clock today with all the sod laid except the fescue. 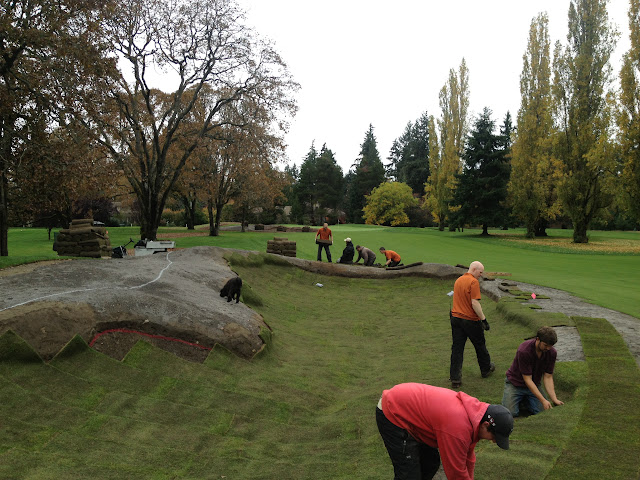 Next the crew attacked the bunkers on #13, starting with the fairway bunker.
Notice there is 6 guys guys from my staff working on laying sod. 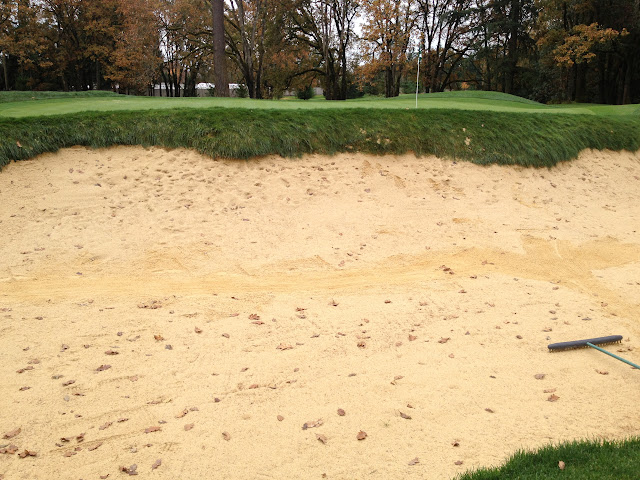 Now notice the bunker on #6 is full of leaves and coyote prints.  This is the kind of thing people will have to get used to this winter.  Rebuilding the bunkers is a large, costly undertaking and the Club Administration, including myself, think it is in our best interest to use as much of the Club's existing labor to offset some of the costs.  In addition, last year it was agreed unanimously by the Green Committee to do less maintenance in the winter months so as to maintain a high standard in the playing months.  This decision manifested from the fact that the operating budget was not increasing from year to year at the same rate as the costs of operating.  Something had to give so it was agreed that the staff size should be smaller in the winter months and people would just have to accept that less maintenance was getting done.  Considering those two factors, a smaller staff and a huge project, it is simply impossible to do everything on the one nice dry day of the week.  So with that said, I hope everyone can try and have a positive attitude about the exciting changes, and not unreasonable expectations because this kind of project does not come without sacrifices. 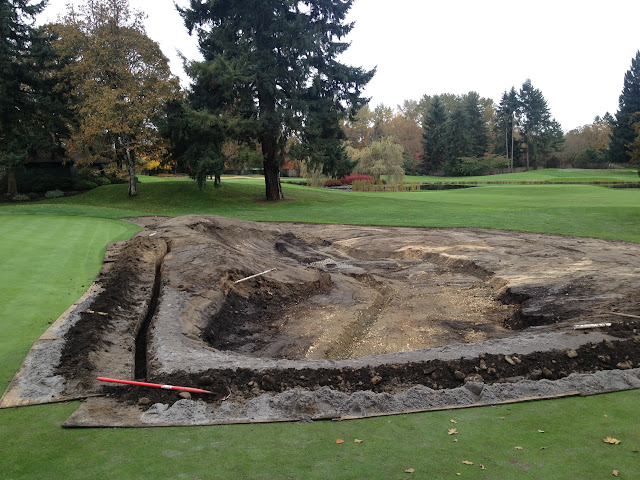 Here is the bunker to the right of the 12th green.  Today it is just roughed in but still it looks like it might be one of the neatest looking ones we've done so far.  The ditch you see there is typical of many of the new greenside bunkers in that we need to reroute the irrigation piping around the new bunker placement.  All the irrigation work like this is my staffs responsibility which is again a good strategy to reduce costs, but it does take us away from the regular golf course maintenance. 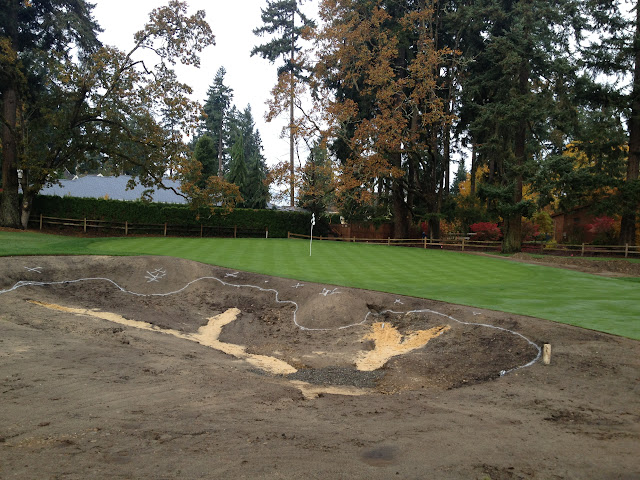 Here's how the bunker on the left of #11 green looked this morning.  The paint marks were made by myself as I went over the final adjustments with the shaping crew. 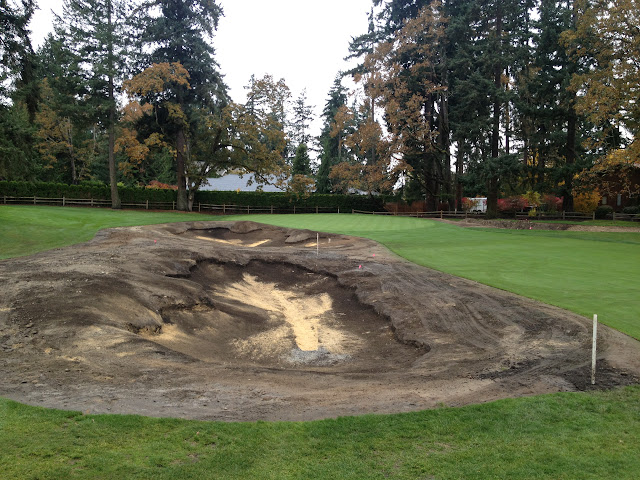 Here's how the bunkers looked on #11 after the final adjustments.  Sod will be coming for these two traps and the bunker on #12 next Wednesday. 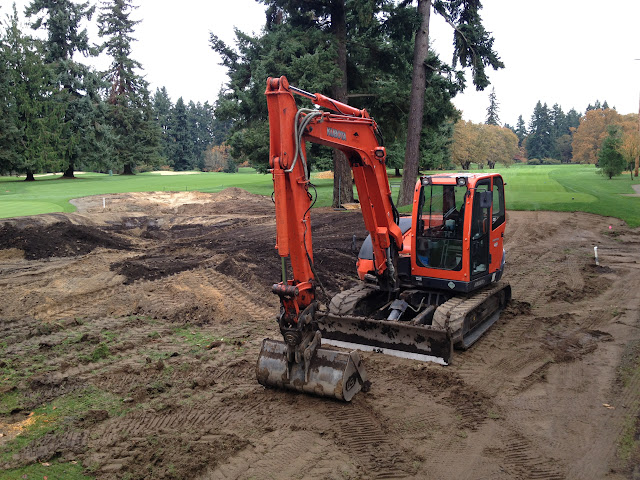 Above you see work has started on #7 green.  The excavator is parked on what will be the new tee for #8. 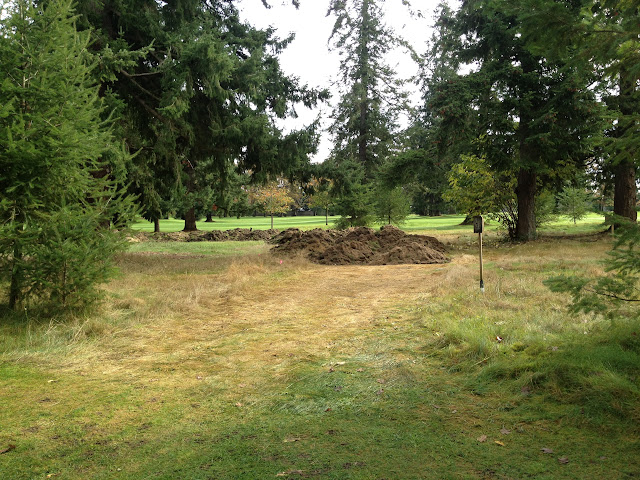 In case your wondering, the piles of stuff in the native area next to #11 and #16 is sod stripped from the bunkers before the renovation.  The sod is the only thing wasted in this project.  All the good soil will be used for building tees and backfilling those bunkers that are being removed. 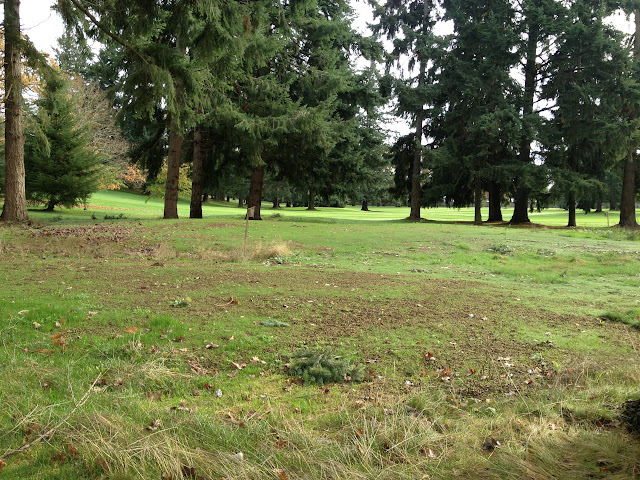 Again in that same native area, you see the fescue seed has germinated on those piles of spoils from the bunker project this past spring.  In no time, it will look like we never got rid of those spoils here.  This is the same thing we intend on doing with the spoils we're piling there today after completion of the project.

Posted by Joel Kachmarek at 9:06 PM