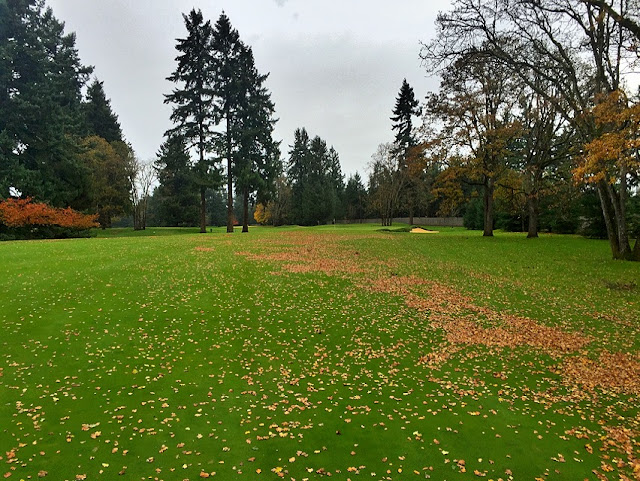 We had above normal precipitation in November and several high wind events so all the leaves are down a little earlier than normal.  We've got most of it picked up and now without the need to blow all the fine turf every day, we have time to start on our long "to do" list.  This is the best part of the off season because almost every day we get to go home knowing we made some kind of improvement on the property.  When you spend all day blowing tree debris only to come in the next day and do the same thing, it feels like you're not being very productive.  Now that it's project time, we know we're making a difference and that helps us get through some of the miserable days of weather we have during the winter.  Here are some of the things we've been working on. 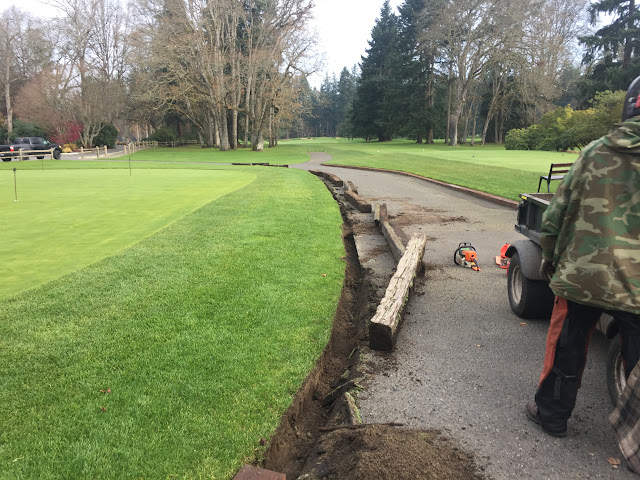 The curbing around the first tee was replaced last spring and we had every intention of replacing the curbing around the putter at that time but it just didn't happen.  The project on the first tee had some delays so we finished it later than I had planned, so once we finished the project and installed the clock I decided it was time to just focus on the golf course. 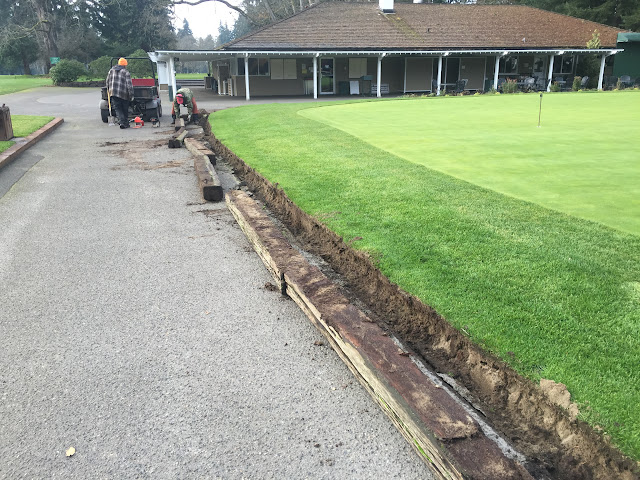 The putter/first tee area is busy with traffic so working here can be difficult when the golf course is open.  Last week we had frost delays every day which made this the perfect time to work on this project.  You can see how the old railroad ties were in pretty bad shape and really hazardous for people to step on.  This project was overdue for sure. We used the same 8X8 timbers that we placed around the first tee in the spring. They are not railroad ties so they don't have creosote in them which makes them more environmentally sensitive.  We intentionally left them as they came off the mill.  They are not planed or sanded so hopefully they will not get slippery.  I think they look great.  Thank you Pinnacle Lumber for finding the perfect material for curbing. 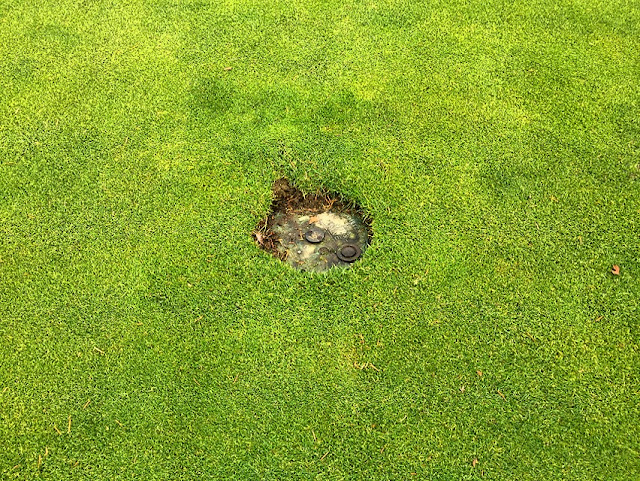 The crew finished raising the sprinkler heads which we started last winter.  That is no small task as we have about 800 sprinklers in the fine turf areas which need to be raised every 2 to three years.  Once the sprinklers we're raised we started raising the valve boxes.  Above is an example of a valve box in desperate need of raising.  Some of these boxes are the original ones installed in 1989 and they look pretty gross.  So, we are not only raising the boxes, we are replacing every box in the fine turf areas.  The new boxes are smaller in diameter and I have designed a custom lid which Keltech plastics made for us. 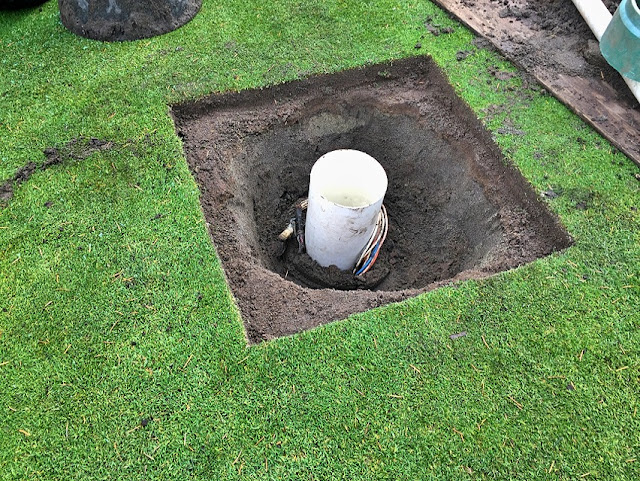 The plastic pipe sleeve is important to keep soil away from the top of the valve. 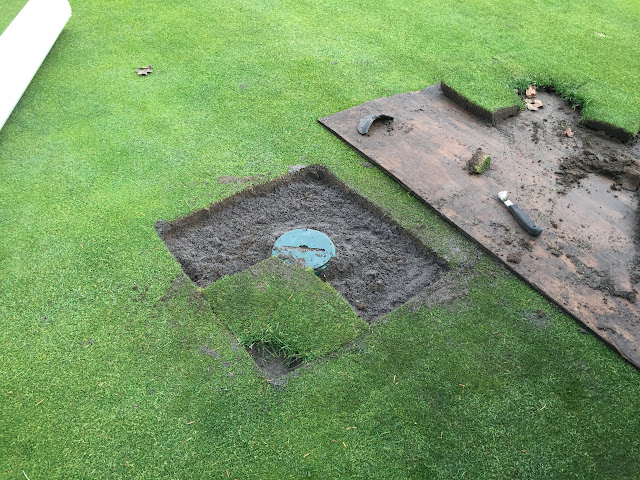 Since the new boxes are smaller than the old ones, we have to get creative with the sodding but once tamped down they look good and the bare spots will fill in quickly. 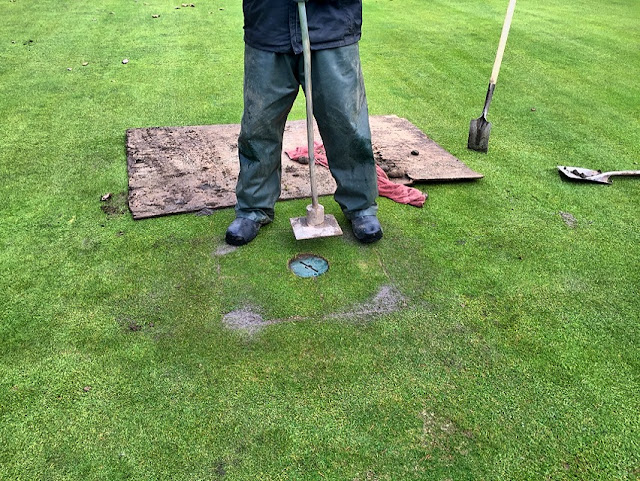 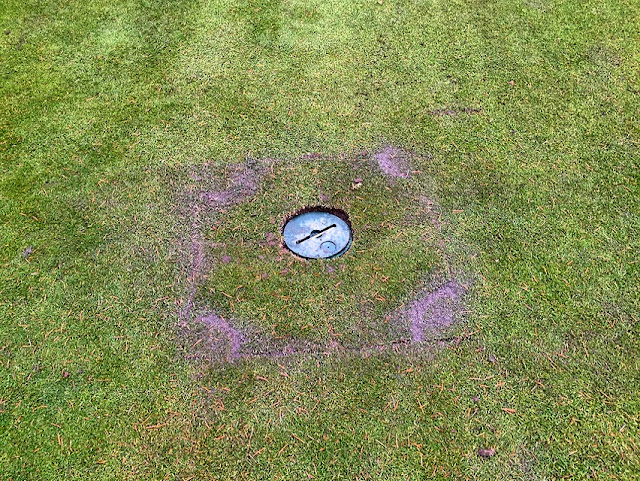 The custom lid was created because every lid you can buy is simply junk.  The lid that comes with these boxes are thin, look cheap, and have a hole in them.  That hole is for your finger so you can pull the lid up, but that hole makes valve boxes really attractive for bees to make their home.  Try turning a valve when there's a bee hive on it.  Our custom lid has a stainless metal handle that drops down so there is no need for a finger hole and no need for a special tool to get the lid off.  Also, you can see there is a recessed area for a yardage tag.  We will be putting new yardage tags on all these boxes very soon. 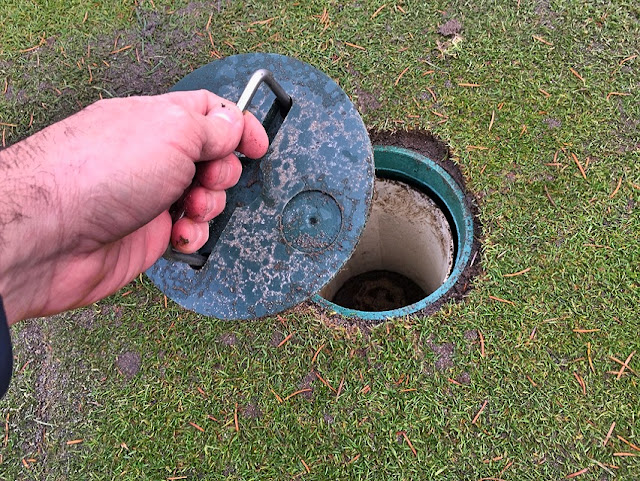 Lastly, back by popular demand we are adding new sand to all the bunkers making them so soft that recovery from them is impossible. 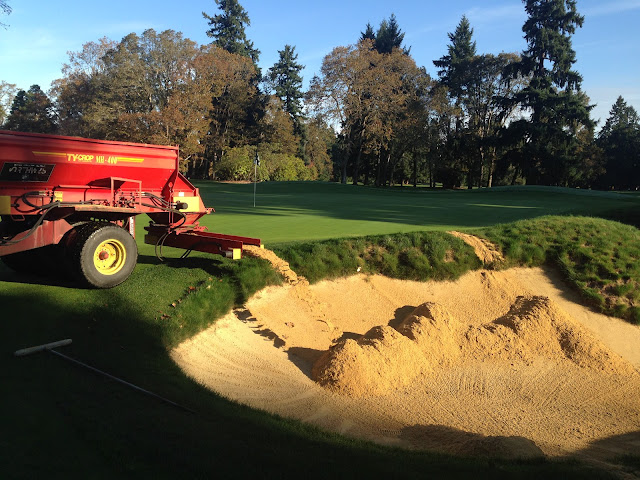 Seriously, we are adding sand to the bunkers because they need it.  I apologize if you get into a trap that we recently worked on because they will be soft for a while. 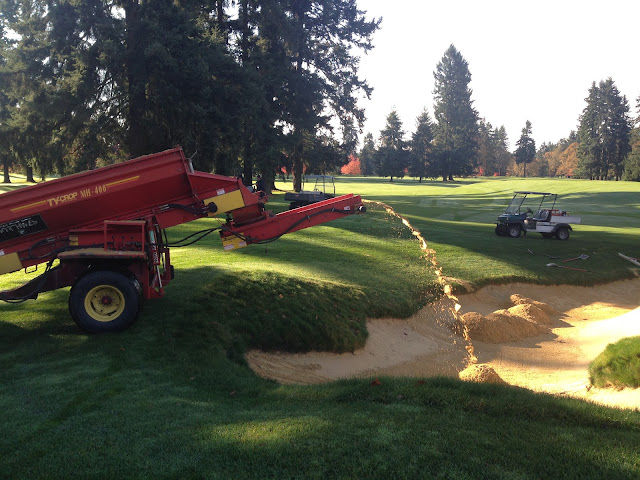 When we constructed the bunkers in 2013, we were judicious with the sand because too much sand is just as bad as not enough when you consider good playability.  Not only that, bunker sand is expensive so controlling costs was really important during the construction period.   Now we are adding sand where we need it but we are still judicious because unfortunately the bunker sand we have is no longer available.  We have several tons in storage but since we can't buy anymore, we will make that stockpile last as long as possible.  Adding sand to bunkers is a necessary evil.  You would be surprised how much sand leaves a bunker annually by golfers hitting shots and by the action of blowing debris from them.  If you don't monitor the quantity of sand and add some occasionally, you'll end up with so many thin areas that the bunker liners will be compromised and then we will start seeing rocks coming up into the bunkers.  So like I said, this process is important and by doing it we are prolonging the life of the bunkers and of course sustaining good playability. Another way of making a difference which makes the off season and "project time" so important and gratifying.
Posted by Joel Kachmarek at 11:07 AM