The trees just south of the 11th tee have been down for a couple of months now and the positive results of this project have become increasingly obvious.  Below is a picture taken from the 11th tee before the removal of the trees and then the next picture was taken just the other day. 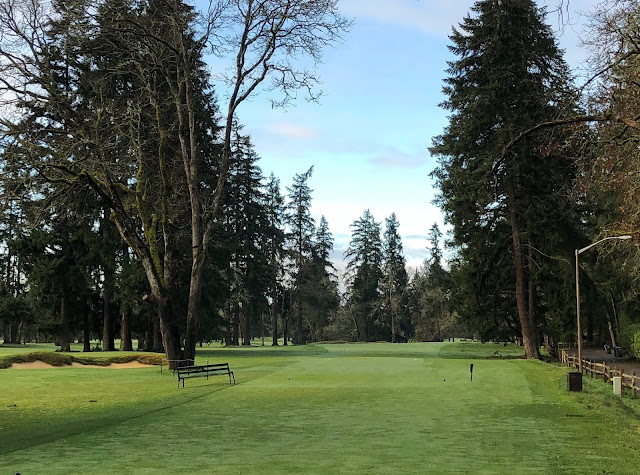 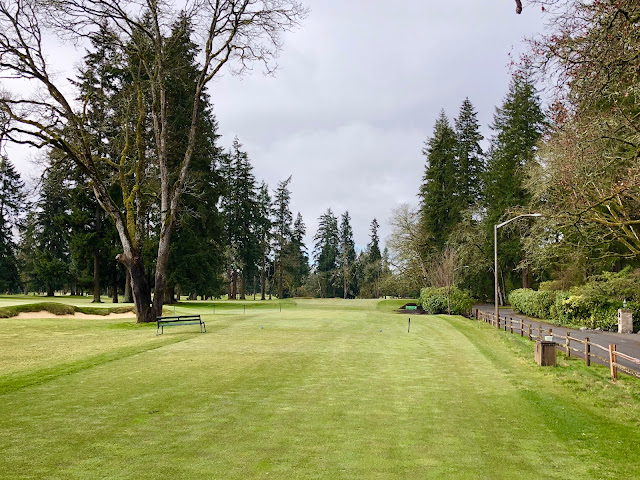 Maybe even more impressive is the view from the south looking back toward the tee.  Here's a before and after picture from that viewpoint.  In these pictures you can really appreciate the size of the trees. 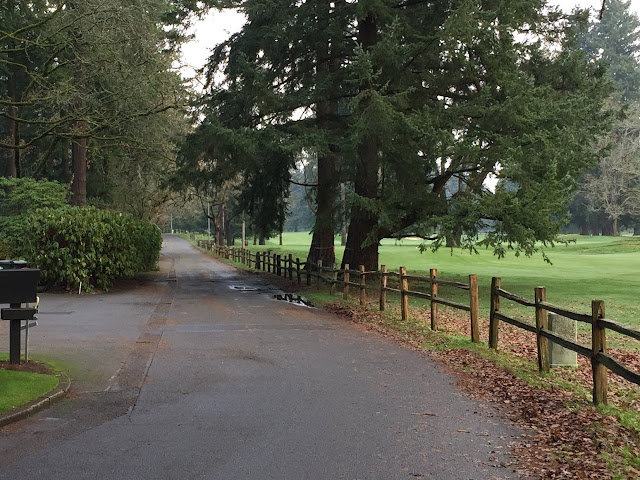 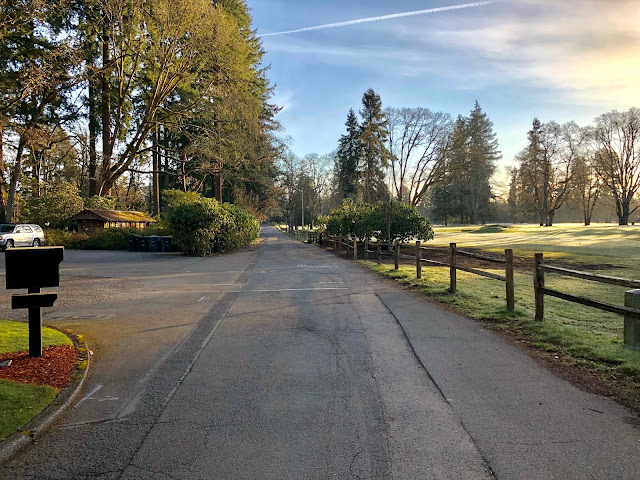 Now of course the benefits of this project are numerous.  For one thing nobody is ever going to have to clean up after those trees.  Falling debris is a year around occurrence with trees that size.  Secondly, the freshly paved road (which is coming very soon) will enjoy decades of strength and smoothness since it wont be compromised by roots heaving up or falling branches.  Thirdly, some very nice native oak trees were released by this project giving them a second chance to live a full life.  I guess you could say a lot of grass plants were also released by this project since there's no question the surrounding turf will greatly benefit from the increase in sunlight.  We must mention the issue of safety.  This project has now given everyone the opportunity to hit their desired shot shape from the tee.  That means it's a lot safer for those people on 16 green since far fewer errant tee shots will be in that vicinity.  Lastly, and most likely the best benefit of this project is simply better golf.  As I just mentioned now you can hit a fade or a draw from the tee which means you have a choice.  Whenever you stand on a tee and have choices or decisions to make, the tee shot all of the sudden is more interesting and that is just simply better golf.  Now I have to give credit where credit is due and Jeremy Pinke (our horticulturist) is certainly due credit and praise for his work on the planting which replaced those trees. 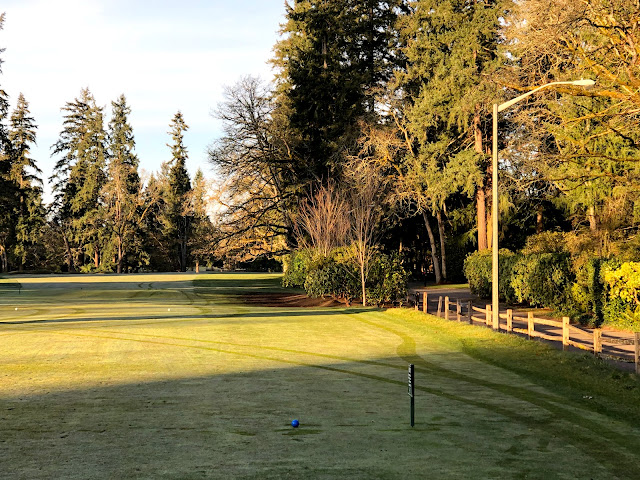 You can see that the planting effectively buffers the roadway and the new trees are a variety that will max out at a height of 30' so they will never cause problems similar to those we experienced from the big firs (i.e. shade, bad golf, road up-heaving).  This planting was quite a project in of itself.  First of all, the plants were donated by some neighbors with the stipulation that we cover the cost of removal and replacement.  The plants had outgrown their space.  Here's what they looked like before transplanting. 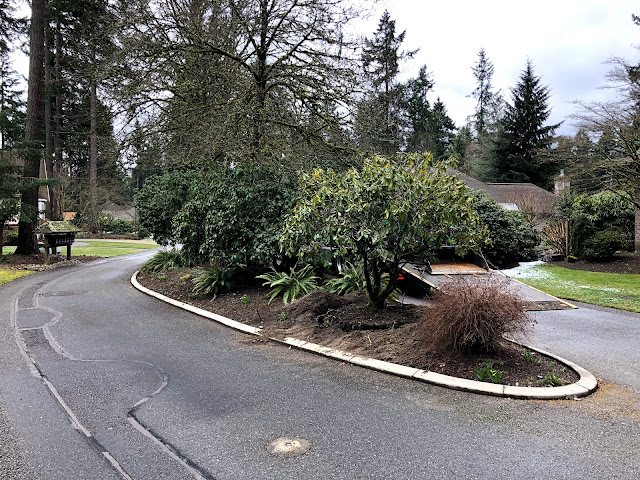 After most of my staff teamed up and hand dug around each of these plants, Jeremy then used a machine to load them onto our trailer. 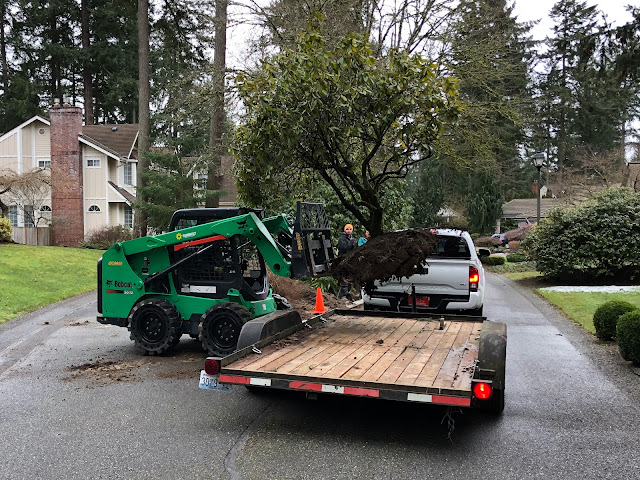 The large plants then had to be off loaded at the golf course, and then transported to the planting area on 11 tee. 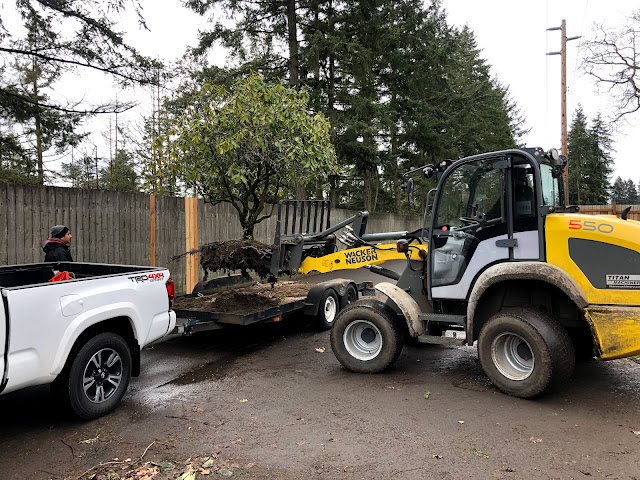 The whole process took several days, and ironically it all came together on a couple snowy days in early March. I honestly had fears that this project would start at the same time the grass would start growing.  No one could have predicted that the course would be covered in snow on March 5th.  The timing just couldn't have been better and it was fun watching the crew work together to get this project done.  I provided the tools, but it was all coordinated by Jeremy and as always he never disappoints.  The planting looks really good, but you should know we're going to add several more plants to increase the overall density.  When you see Jeremy, give him an attaboy.  This was a tough project and he's pretty proud of how it's turned out so far. 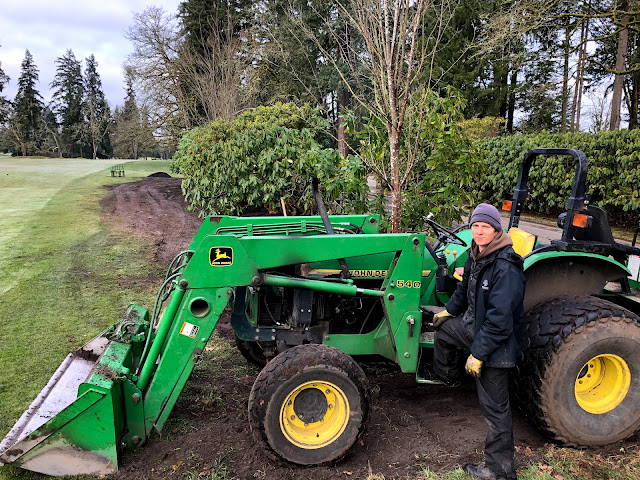 Posted by Joel Kachmarek at 8:51 AM